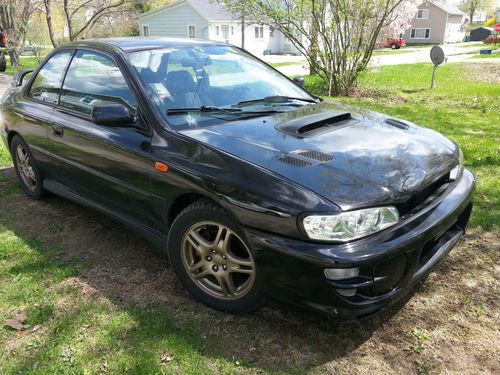 For sale is a 2001 subaru impreza 2.5 rs coupe with 112k miles on it the car is black with black interior it runs and drives great but could use an alignment and some new tires the clutch is strong and the transmission shifts smooth it leaks no fluids and starts right up everytime. The only modifications to the car are cold air intake and catback exhaust which is causing a check engine light for 02 sensor the abs light is also on. The car has some rust around the rear wheel wells as seen in pictures and some door dings here and there and the grille is missing. I have aftermarket headlights foglight covers front and rear strut tower braces and rear spats uninstalled Its also got wrx wheels on it and a set of 17x9 motegi mr7's which will be included for the right price. The car has a rebuilt title out of illinois due to an accident which cause the front bumper and hood to be replaced, however it caused no mechanical or frame damage. I originally bought this car because I planned on doing an sti swap but I cannot afford it right now and thats why I have decided to part with it. A nonrefundable deposit of 500 dollars is required within 24 hours of auction ending and payment must be made in full within 1 week of auctions end. Thanks for looking and happy bidding.