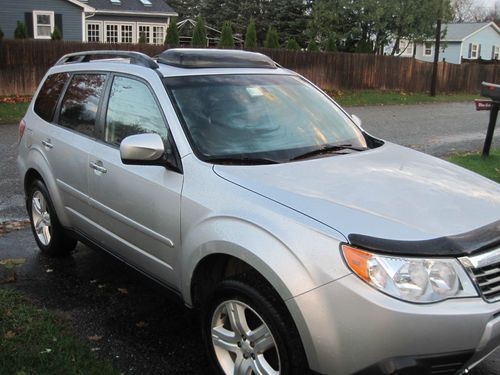 2010 Subaru Forester Limited in very good condition with only 48000 miles. This car has all the Limited options with the addition of towing hitch with best in class capacity, Satellite radio Capability,  6 cd changer with AM/FM Radio, All weather package which includes heated side mirrors and windshield wipers a must have in the winter. It also has heavy duty floormats and cargo area protective mat, and the panoramic moonroof with air deflector. It has the remainder of the 100,000 mile bumper to bumper warranty thru Subaru of America and has had recently added 4 new tires (Bridgestones) and new rear brakes.

Among tuners, the legions of Subaru fans are hard to top, displaying all the fanaticism of English soccer fans and a dedication to their vehicles that borders on obsessive. These are compliments, by the way. In the latest video from Drive, Matt Farah takes a look at a pair of very special Imprezas - early Impreza 2.5RS Coupes that have had some serious heart transplants.
The first, a traditional blue model, sports the 2.5-liter, turbocharged flat-four from the 2004 WRX STI, which is good for around 300 horsepower. The other Impreza is a bit more hardcore - the engine is a 2.0-liter, turbocharged four-cylinder from the JDM WRX STI, which we suppose makes it more of an Impreza 2.0RS Coupe. Besides the different engines, both cars represent the unique ideas and style of their owners.
The 10-minute video explores this, digging into why people tune, and how it's a reflection of their own personal driving style and character. Take a look below for another fun vid from the team at Drive.