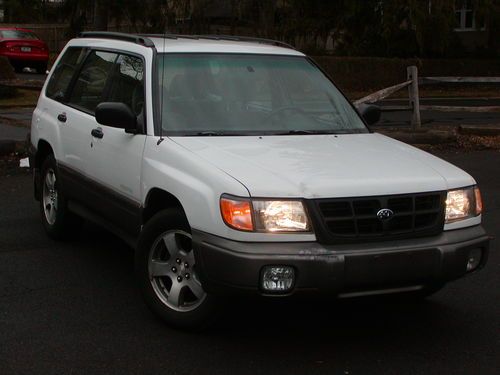 I manage storage facility where this car is currently stored.
I work this part time. Pick up will be Saturday April 6.

The car  will be SOLD AS IS and has to be moved by Saturday April 6 , 2013  . I know this is shortly after the auction ends and time may be needed to arrange pick up and however if more time is needed, this is easily remedied by paying for the vehicle on time and emailing, requesting more time for pick up. Provided it is paid for on time, an additional weeks grace is automatic, if more time is needed beyond that it will be arranged  at that time with the new owner.

Shipping OK , I will help with all reasonable requests  in this area, buyer responsible for shipping , all costs are the buyers responsibility

0 feedback bidders must email for permission to bid, no email will be subject to cancellation without warning

Notice:Only Bidders will figure in final sale, high bid will have opportunity to buy car, car will be sold.

Just a few weeks after announcing the pricing for the 2015 Legacy sedan, Subaru is getting ready to roll out the all-new 2015 Outback with a base price $24,895, plus an $850 destination charge. Like its platform-mate, the styling could be described as an evolution of the previous generation, but the company claims big changes underneath to improve comfort. It's scheduled to starting hitting dealers this summer.
The Outback continues to share most of its mechanical bits with the Legacy, including its engines. The 2.5-liter boxer-four-cylinder gets a touch more potent with 175 horsepower and 174 pound-feet of torque, and better fuel economy at 25 miles per gallon city, 33 highway and 28 combined. The 3.6-liter flat-six-engine has 256 hp and 247 lb-ft and also sees a marginal economy improvement at 20/27/22. All models now come standard with a CVT, and Subaru's Symmetrical All-Wheel Drive gets some improvements with standard Hill Descent Control, Hill Start Assist, Active Torque Vectoring and X-Mode, a system to increase traction when needed.
The base 2.5i trim goes for $25,745 (all prices after destination), up $425 from last year's CVT base model. It comes standard with a 6.2-inch touchscreen infotainment system with a USB port and AUX input. The 2.5i Premium trim retails at $27,845, but the upgrade nets buyers dual climate zones, a 10-way power driver's seat, leather-wrapped steering wheel, all-weather package and a 7-inch infotainment system. The 2.5i Limited costs $30,845 and includes leather upholstery, 18-inch wheels, a 12-speaker stereo, heated rear seats, lane change assist, rear cross traffic alert and a power tailgate. The top The 3.6R Limited trim is $33,845 and in addition to the bigger engine features HID low-beam headlights and stainless steel dual exhaust tips.

Subaru has a problem on its six-starred hands, but you wouldn't know it at first glance. Sales are up; in fact, the Japanese automaker has recorded 28-straight months of increased sales in the United States, leading to the best first-quarter Subaru has ever recorded, and 2014 will almost assuredly be the seventh straight year it has posted improvements. So, what's wrong? The answer is simple, though clearly complicated to resolve. Sedans - specifically, midsize examples - have proven a tough nut for Subaru to crack.
The vast majority of those impressive sales statistics have come from just a few models, namely the Forester, Outback and XV Crosstrek. The Impreza continues to sell at a respectable pace, but it's telling that the XV, after just three years on the market, is already Subaru's third-best-selling nameplate, outpacing the aforementioned Impreza (on which it's based), its high-performance WRX sibling and the Legacy, which is now entering its sixth generation, having been first introduced way back in 1989. It's that last model we're examining today.
Despite the fact that the Legacy plays in a hotly contested market segment that includes such stalwart sales champions as the Toyota Camry, Honda Accord, Ford Fusion and Nissan Altima, Subaru's competitor registers as a barely visible blip on the radars of new-car buyers. Graphically illustrated another way, Toyota sells 17 Camry sedans for every new Legacy that Subaru moves.