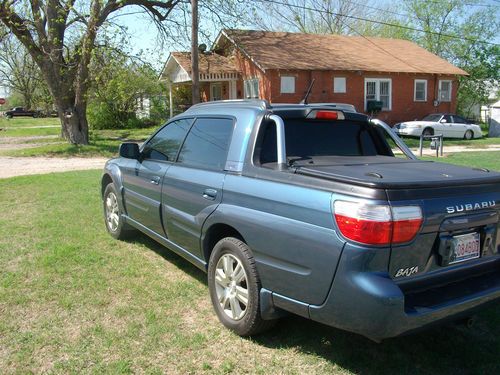 YOU ARE BIDDING ON MY 2006 SUBURU BAJA.  THIS ALL WHEEL DRIVE TRUCK HAS NEVER BEEN WASHED INSIDE A CAR WASH.  I HAVE ALWAYS WASHED THIS TRUCK BY HAND.  I BOUGHT THIS TRUCK NEW WITH LEATHER SEATS, SUN ROOF, AUTOMATIC, ALL WHEEL DRIVE, REAR BED COVER, TIRES 50%, TURBO, 6 CD CHANGER, TINTED WINDOWS, FOG LIGHTS, THIS TRUCK IS A ONE OWNER TRUCK AND LIKE BRAND NEW.  THERE IS NOTHING WRONG WITH THIS TRUCK AND IT IS READY TO GO ANYWHERE.  THIS TRUCK IS GREAT ON FUEL MILEAGE GETTING 25 MPG ON THE HIGHWAY AND 18 MPG CITY DRIVING.  IF YOU WOULD LIKE TO TALK WITH ME REGARDING THE SELL OF MY TRUCK PLEASE FEEL FREE TO CALL ME ON MY CELL 580-310-4720 ASK FOR JOE.  I DO RESERVE THE RIGHT TO END THIS AUCTION EARLY DUE TO HAVING IT LISTED LOCALLY.  BUYER IS RESPONSIBLE FOR PICKUP OF VEHICLE.  THIS VEHICLE IS LOCATED IN THE CENTRAL PORTION OF THE UNITED STATES JUST 90 MILES SOUTHEAST OF OKLAHOMA CITY, OKLAHOMA.  BUYER CAN FLY IN TO WILL ROGERS WORLD AIRPORT, OKLAHOMA CITY, OKLAHOMA AND DRIVE THIS BEAUTIFUL TRUCK HOME.