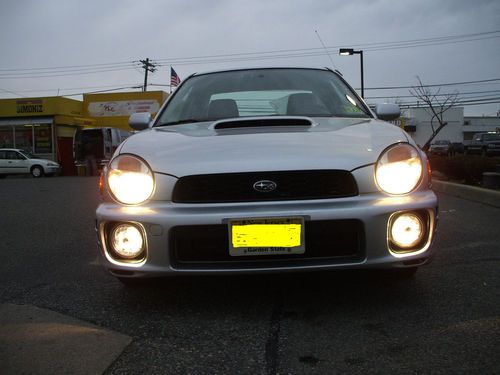 Hello, you are looking at a 2003 Subaru Impreza WRX automatic transmission, turbocharged , this car is privatly owned and driven only by my wife and myself, this is a super clean car runs 110% no issues or stories behind at all, its an all wheel drive has almost new tires on it garage kept non smoking car it was used only for personel use, this car has lots of power under the hood with its original and stock parts, the only thing i have changed on that car is a blow off valve and gate valve for the turbo, car have 116391,comes also with a remote starter ,and car still insured and registered so means we still can drive the car unless it's sold.Great vehicle also in gas no scratches, no rusts absolutely everything works properly , no check engine light on or any other warning lights i took 2 pics with engine on and off to see that no warning lights,anyway just look on ebay or any dealer or even private seller just to see what those cars can go for ( price wise) so this is a steal and the car is locally also for sale so if any one steps in 1st he will have the car, and i will not send second chance BS.... scam, Please stop by to see drive and check the car yourself prior to place a bid or hit buy it now,and if you have any question please feel free to contact me at 908-839-0277 or email me at: acar4u65@gmail.com and i will do my best to answer all your question,so please refer to pictures and if you need more infos call or even text me, thank you for looking and good luck on your bids.
the car have 116391 K.
Please do not bid if you are not sure to buy.someone just place a bid and never responde to the purchase.the car is sitting inside the garage if anyone want to come look at it feel free to do so.
again call or text me at 908-839-0277, thank you

Coming Soon. With those two words, Subaru has officially dropped a confirmation bomb on our expectations for a higher performance version of the much-loved BRZ coupe, known, of course, as the Subaru BRZ STI. Two teaser images are being shown on the Japanese web-side home of STI along with the promise of 'coming soon,' and there's also a rather lovely looking set of twisty roads with the words 'Purity of Handling.'
There's not much we can glean from the two teaser images, but we're expecting an aggressive body package to go along with a significant increase in horsepower from the BRZ STI. We're also not totally clear on what 'coming soon' really means - the auto show season will be kicking off in full swing this fall, and we wouldn't be surprised to see a debut in Los Angeles. That said, you'll know more just as soon as we do.