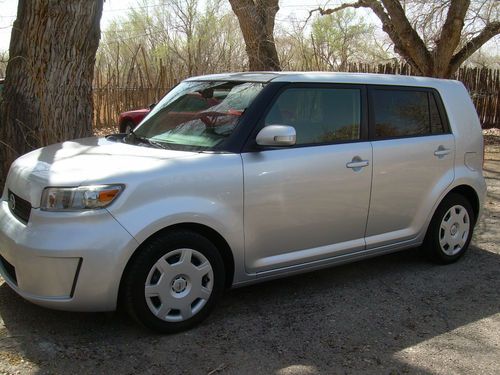 I have for sale my 2008 Scion XB. The car is in great condition. Oil has been changed as recommended by manufacturer. This car is owned by a non-smoker. The windshield is cracked and will need to be replaced. There is a scuff on the front spoiler, I have a closeup shot in the pics. The tires have about 8k miles on them. This was a daily driver for me. The car gets about 30 MPG for my driving style. All the seats are in very good condition. This vehicle was used as a comuter car mostly on highway thus there are small nicks on front bumper area. I purchased this car from a local dealer about a year and a half ago. You will be responsible for all shipping costs. I will deliver to Albuquerque at no cost. $500 deposit due within 24 hours of auction close, balance to be paid within 7 days of auction close. Clear, clean title will be sent via certified mail. Just a note, I have only 1 key.

The New Poster Child For Cheap Thrills
Let me tell you about a man named Larry. Larry works for a company called STI Fleet Services, one of a few companies that are responsible for the cleaning, prepping, maintaining, scheduling, delivering and picking up of the cars we test on a weekly basis, not to mention a whole slew of other duties. STI and its competitors are the silent heroes of this whole automotive journalism biz. Larry is one of the guys responsible for a lot of the grunt work - he's been delivering cars to me for nearly seven years now, and because of that, we've developed a bit of a rapport. Now that I think about it, my history with Larry goes back farther than several of my friendships, as well as every romantic relationship I've ever had... combined.
With that much history behind us, Larry knows my taste in cars pretty well. And even though he doesn't voice his own opinions about what's being delivered to me, Larry silently knows when he's about to hand me keys to something truly special. When Larry arrived at my door with a bright red 2013 Scion FR-S, I tried to play it cool. But Larry knows me better than that.