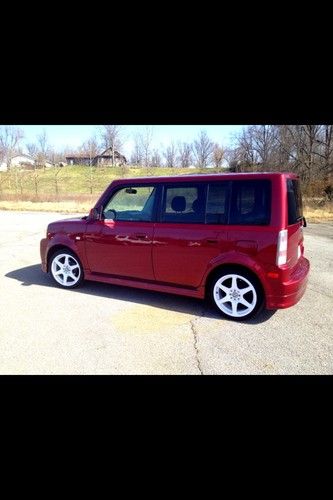 Condition: Used: A vehicle is considered used if it has been registered and issued a title. Used vehicles have had at least one previous owner. The condition of the exterior, interior and engine can vary depending on the vehicle's history. See the seller's listing for full details and description of any imperfections. ...
Couldn't upload pictures. You can message me or text me for pictures. 573-521-0770
2006 Toyota Scion Xb.
121,000 miles
5 speed manual trans
White 17" alloy wheels
Good tires
Great gas mileage
Adult driven
All built by Toyota
Very reliable car
Power windows & door locks
Premium pioneer sound & CD player
Prior salvage title due to hit in the rear but has been professionally been redone. Has been drive with no problems for over 60,000 miles since repairs were made.
$500.00 deposit due within 24 hours after auction ends. Rest of balance due in cash, when car is picked up within 7 days.
Located in Sikeston, MO

In the market for a Scion FR-S (or Subaru BRZ), but don't want the same one your neighbor's got? Scion has good news for you. At the New York Auto Show today, the Japanese automaker has announced the availability of this FR-S Release Series 1.0.
As the first Release Series FR-S (the aging xB is debuting its tenth alongside it), this special edition has been spruced up by Toyota Racing Development with a series of visual and aerodynamic enhancements to give the FR-S a bit of extra edge. Included in the Release Series 1.0 is an upgraded aero kit, an exhaust tip for every cylinder in the engine (that makes four, folks), and a lowered suspension with TRD springs and HID headlamps. Did we mention it's all capped by Yuzu yellow paint?
Inside, you'll find black seats with T-pattern upholstery, a TRD steering wheel, shifter and cargo mat, dual-zone climate control and push-button ignition with smart key. Scion isn't saying exactly what this model will cost, but it is saying it will come in under $30,000 (before the $755 delivery charge).