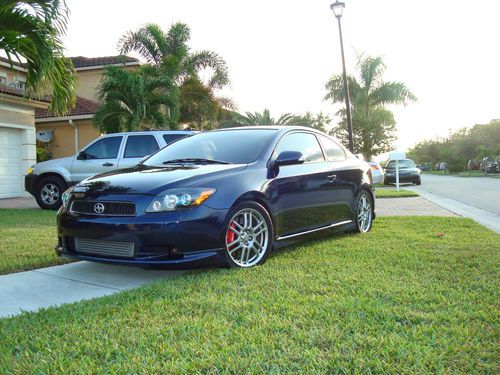 Scion has become something of a tuner favorite, so it's only fitting that Toyota's youth-oriented brand have an array of show cars ready for SEMA each year. And this year will be no exception.
Scion itself is bringing five cars to SEMA this year, and as you might expect, they're mostly based on the FR-S. There's a black one done in partnership with DJ Steve Aoki with an onboard mixing station, another (in white and black) done with Bulletproof Automotive with a 500-horsepower engine and fresh bodywork, a grey one done up with GReddy with a 750-horsepower turbocharged engine and, the slickest of the group, the Style J concept (pictured above) with matte grey bodywork, a Scirocco-style nose and a full leather interior. There's also a stretched xB done up by Cartel Customs and laden with tech.
Aside from Scion's own show cars, the automaker has also released the details on three entries for its Tuner Challenge: one each from the East Coast, Pacific Northwest and Southern California. Scion gave each builder a stock tC, 90 days and $15,000 to build their concepts that will be judged by an expert panel at the SEMA show, with the winner taking home a $10,000 prize.

A brand like Scion is sort of a natural fit here at SEMA, what with the customizable schtick that it's trumpeted since being born in 2002. We've already seen some weird takes on the xB, but SEMA's magic wand has once done interesting things to the FR-S, seen here in a quartet of concepts.
Something that kind of piques our interest is this roofless, let-the-sun-in FR-S, but not in a way that we've seen before. Tuner Jeremy Lookofsky of Cartel Customs put the two-tone, topless FR-S together, and his creation also features an all-metal wide body with an integrated rear spoiler. It's decked out in a unique Azzuro California Blue (looks pretty beachy to us) and includes upgrades like a louvered rear window, 19-inch wheels, a center-mounted exhaust, big ol' turbo kit, KW coilover suspension, upgraded brakes, and a super-powerful audio system.
Also featured in FR-S land is the 10th annual Scion Tuner Challenge, in which three tuners received $15,000 to modify the coupe, taking cues from the Release Series 1.0 that debuted earlier this year. The three cars were done up by Super Street magazine, GT Channel, and Speedhunters. A panel of judges will look at the customs and a $10,000 grand prize will be given to the winners.