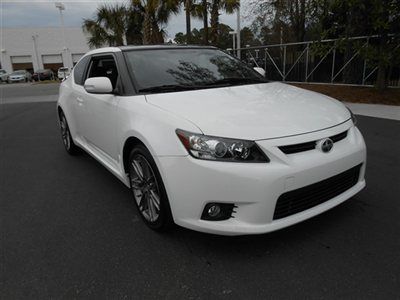 As the story goes, Toyota's Scion brand was imagined up in someone's basement and then came to fruition in 2003 as a youth-oriented brand with a focus on delivering unique vehicles with an equally unique retail experience. A decade later, the brand has grown to five models, which will each be commemorated starting in June with a new Scion 10 Series edition.
In varying quantities, Scion will be offering the FR-S, tC, iQ, xB and xD with an exclusive package that will all come in the Silver Ignition exterior color. Aside from the paint, these cars will also receive Scion badges on the front and rear that are backlit with blue LEDs that illuminate when the car is unlocked. Silver seat belts and a solar-powered illuminated shift knob will help distinguish the interiors of these cars, but the iQ, xB and xD will stand out further from the outside with darker alloy wheels.
In total, just 10,000 Scion 10 Series models are planned, and each will be identifiable with a sequentially numbered badge inside the car. The redesigned 2014 tC will get the most of the special-edition models with 3,500 units, while other new models like the FR-S and iQ will be restricted to just 2,500 units and 900 units, respectively. The original Scion, the xB, will get 2,100 Scion 10 Series models, and the xD will round out the 10,000-unit run with 1,000 models being produced. Scroll down for the official press release.