Silver Scion Tc, Excellent Condition- A Must See on 2040-cars 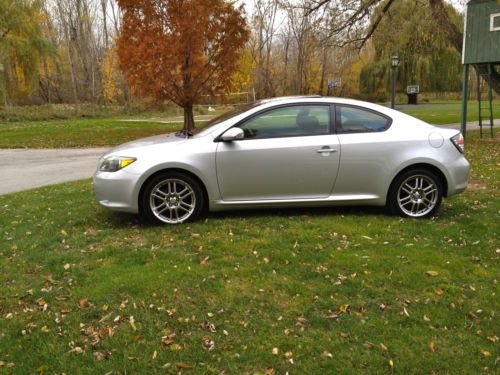 The timing is perfect. Really, Scion couldn't have done any better, unveiling the latest member of the Scion tC Release Series - number 9.0, a stylish black-and-orange looker - barely a day after the San Francisco Giants, whose color scheme is black and orange, won the World Series. Also, one day before Halloween.
The Scion's well-timed color scheme is the product of Jeremy Lookofsky of Cartel Customs. The company's styling treatment also includes the custom body kit and orange seatbelts.
The Release 9.0's two main performance enhancements include a center-exit exhaust and TRD lowering springs. Beyond that, though, the changes are largely aesthetic. Black wheels, accents and badges round out the exterior changes, while the cabin features orange contrast stitching on the steering wheel and seats and orange paint on the dash and shifter surround.