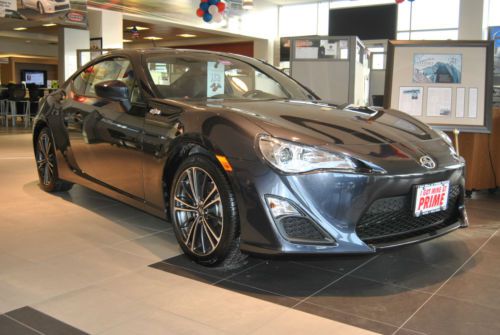 Scion brought four FR-S concepts to SEMA this year and one xB concept, while another three Scion tCs were brought to the show by three different shops that are competing in Scion's Tuner Challenge. The modified Scions range from mild to insane, and show how popular they are in the tuner world.
The Tuner Challenge teams brought unique creations to SEMA, after Scion gave each of them a tC, $15,000 and 90 days to modify it. At 11:00 AM on Wednesday, judges picked the Young Tea Scion Simpli-tC as the winner, the Walter Franco Scion L-DZ Concept got second, and third place went to the Josh Croll Scion WSD-tC. Check out the three videos below to watch the tC builds from start to finish.
Out of the FR-S concepts brought to the show, we're gravitating toward the GReddy Performance x Scion Racing Drift FR-S (top), which has the venerable 2JZ-GTE turbocharged straight-six engine in place of the flat-four that comes standard in the rear-wheel-drive coupe - ready to pump out 750 horsepower - and the Bulletproof FR-S Concept One, which features a striking, handmade wide body and a heavily modified, turbocharged flat-four that puts out 500 hp.

Scion FR-S may be getting supercharger kit from TRD

The Scion FR-S was just named the Hottest Sport Compact at the 2012 SEMA Show, and Toyota Racing Development (TRD) is apparently looking to make this car a little hotter. According to Car and Driver, TRD is close to coming up with a supercharger to fit to the car's 2.0-liter flat-four engine in order to squeeze out a little more performance. Currently, the FR-S produces 200 horsepower, but there's no guessing how much a supercharger could improve this figure.
With Subaru seemingly hard at work on a new turbo engine for the BRZ and even possibly a BRZ STI model, it is only logical for a force-fed FR-S to be in the works as well. Surprisingly, though, the report says that supercharger would be unique to the FR-S, but since the Scion and Subaru BRZ are mechanically identical, it isn't clear how this would be accomplished. TRD already offers plenty of upgrades for the FR-S such as exhaust, brake and suspension kits, and it offers a handful of superchargers for other models including the 5.7-liter V8 used in the Toyota Tundra and the 4.0-liter V6 used in the Tacoma.