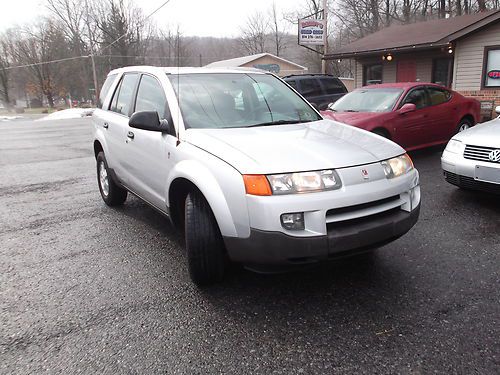 Hi,   I have a 2003 Saturn Vue AWD four door SUV that I am listing here on eBay. This car runs and drives, has AWD that is working as it should, air conditioning, power locks, power steering, power windows, am/fm with cassette, cruise control, a tilt steering wheel and alloy rims. The Saturn has a four cylinder engine and automatic transmission. The car is in better than average condition as far as the body, interior and the way it drives. Here is the deal, it has a constant clicking sound coming from the drivetrain. I had it to a transmission shop and I was told that it has a bearing in the transmission case that needs replaced. This isn't a cheap repair. The car runs great but it is going to need repaired. I have driven the car more than two hundred miles and it isn't any worse than when I bought the car. Buy this Saturn to repair or for parts, sold as-is.    One more thing, I am selling without reserve.  High bidder owns. Thanks for looking and have a good day!