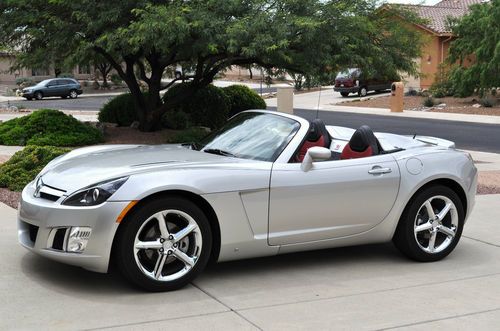 Condition: UsedA vehicle is considered used if it has been registered and issued a title. Used vehicles have had at least one previous owner. The condition of the exterior, interior and engine can vary depending on the vehicle's history. See the seller's listing for full details and description of any imperfections.Seller Notes:"Like New Sky Convertible with 13,600 miles. This 2008 Turbo Sky Redline smells, looks and drives like it just came off the showroom floor. I bought it new in 2008 and have babied it ever since. It has never seen a dirt road and I hand polish it when it gets dusty. There are two tiny scratches on the back edge of the spoiler(see photo). It is an Arizona car and been garaged its whole life. This car WILL be a collector's item and with this low mileage and mint condition she is a keeper."

Copy and Paste This Link to see all photos.   https://www.dropbox.com/sh/1m339c0pk9dwjuy/NkwHLyXDWh

I BOUGHT THIS VEHICLE WITH THE INTENTION OF KEEPING IT AS A COLLECTOR.  GM MADE A BIG ERROR WHEN THEY STOPPED PRODUCTION AND NOW THIS TURBO POWERED, SEXY SPORTS CAR IS BEING SCOOPED UP BY KNOWLEDGEABLE AND SAVVY COLLECTORS.   BEFORE PURCHASING THIS CAR I WENT TO THE BARRETT-JACKSON CAR AUCTION IN SCOTTSDALE AND IT SEEMED THAT MANY OF THE HIGH END AUCTIONS WERE OF SILVER AND METALLIC VEHICLES  WITH RED AND BLACK LEATHER INTERIOR.  JUDGING BY THE HEAD TURNS AND COMPLIMENTS FOR THIS CAR THE SILVER PEARL EXTERIOR AND RED/BLACK LEATHER INTERIOR WAS THE CORRECT CHOICE.  AT THE AUCTION, A COLLECTOR TOLD ME THAT THE SKY WAS SO SEXY LOOKING BECAUSE THE REAR FASCIA OF THE SKY IS HANDMADE FROM FIBERGLASS TO RESEMBLE THE FASCIA OF THE FERRARI F-430, WITH THE SHARK-LIKE FINS.  HE ALSO TOLD ME THAT THE EXHAUST TIPS ARE THE SAME YOU FIND ON THE PORSCHE 996.  THE REAR SPOILER IS THE CLINCHER IN THIS WORLD CLASS EUROPEAN LOOK STYLING.

FOR THIS AND SO MANY MORE REASONS I LOVE THIS CAR. I HAVE BEEN WATCHING EBAY FOR SOME TIME AND HAVE NEVER SEEN A 2008 SKY WITH MILEAGE THIS LOW (13,600 MI) AND LOOKS THIS SUPERB.  EXTREMELY CLEAN BODY AND INTERIOR.  ZERO ACCIDENTS.  WHEN I SAY THE CAR HAS BEEN BABIED, I AM THE ONLY PERSON WHO HAS EVER DRIVEN IT.  THE CAR RUNS AND DRIVES LIKE NEW.  IT LIVES IN ARIZONA IN A GARAGE WITH PLENTY OF ELBOW ROOM.  THE A/C BLOWS COLD AIR, THE TRANSMISSION SHIFTS PERFECTLY, THE BRAKES ARE STRONG AND THE SOUND SYSTEM IS TREMENDOUS.  THE MONSOON SPEAKERS GIVE BRILLIANT CLARITY AND FIDELITY OF SOUND.    YOUR WIFE MAY FIND YOU OUT IN THE GARAGE LISTENING TO YOUR FAVORITE MUSIC IN THE CAR.  THAT IS HOW GOOD IT SOUNDS.  EVERY MECHANICAL AND ELECTRICAL SYSTEM WORKS FLAWLESSLY.  THE CAR LIVES IN ARIZONA AND THERE IS ZERO RUST.  NO LEAKS FROM THE TOP OR CAR. PAINT IS IN EXCEPTIONAL SHAPE.  THIS SKY NEEDS A NEW GARAGE AND SOMEONE WHO WILL CONTINUE CARING FOR HER IN THE STYLE SHE HAS BECOME ACCUSTOMED.