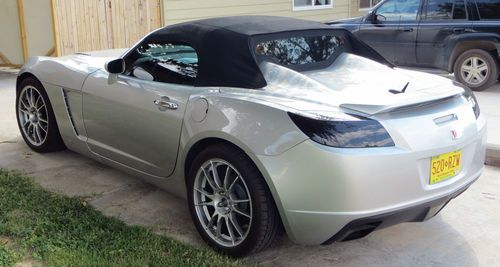 Condition: UsedA vehicle is considered used if it has been registered and issued a title. Used vehicles have had at least one previous owner. The condition of the exterior, interior and engine can vary depending on the vehicle's history. See the seller's listing for full details and description of any imperfections.Seller Notes:"Small crack on the bottom of the front bumper"

Here we have a beautiful 2008 Saturn Sky Redline with only 35,162 original, mostly highway miles. This car is in near pristine condition, always garaged, never smoked in. everything works as it should. Always Babied! The only issue is on the bottom of the front bumper there is a small crack(see pictures)

This sporty convertible is fast stock, 260 hp, 260 trq.  But... this one has the Trifecta tune!  These cars come stock with a suspension adjustment button which switches between normal mode, traction control off, and competition mode,in normal drive mode the vehicle is stock, in traction off mode, it is stock with traction control off, and once switched to competition mode the Trifecta tune is activated giving this vehicle a whopping 350hp, and 380 lb. of torque! While still achieving over 40MPG highway! The Trifecta tune, when activated adjusts fuel, timing, boost, ect and is perfectly safe for this motor! The tune was actually specifically designed for this car! The mode can be switched at any time while driving or parked. This Sky turns into supercar performance when in tune mode.  New tires, aftermarket OZ racing wheel, and a taillight black out kit. This is a one of a kind, collectors sports car with looks and performance.  You wont find another one in this condition, like this for under $23,000.  The wife and three kids have convinced me the once a month a drive this beauty is just not worth keeping it any more:)

Feel free to ask any questions, and thanks for looking!