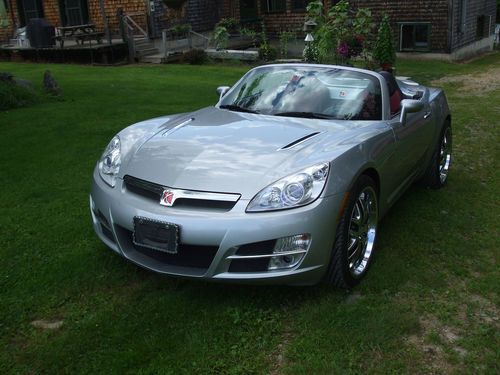 Condition: UsedA vehicle is considered used if it has been registered and issued a title. Used vehicles have had at least one previous owner. The condition of the exterior, interior and engine can vary depending on the vehicle's history. See the seller's listing for full details and description of any imperfections.Seller Notes:"WHEN CAR WAS STILL NEW AT DEALERSHIP,BEFORE BEING SOLD. IT WAS IN A SMALL ACCIDENT, WHICH REQUIRED THE REAR BUMPER TO BE REPAINTED,NOT REPLACED BUT JUST PAINTED. THE CAR AT THAT TIME HAD 15 MILES ON IT."

THIS IS A VERY NICE LITTLE CAR,RUNS AND DRIVES PERFECT, NO ISSUES. ALMOST NEW 20 INCH CHROME WHEELS AND TIRES, NEW BRAKES ALL AROUND. NEEDS NOTHING AT ALL !!!!!  INTERIOR IS VERY CLEAN. REAR BUMPER COVER COULD USE A REPAINT?  (((( SEE PICTURE )))  DEPENDS ON HOW FUSSY YOU ARE, YES IT IS NOTICEABLE!!. OTHER THAN THAT A VERY GOOD LITTLE CAR.  HAS MONSOON FACTORY 6 DISC C.D. PLAYER. YOU COULD DRIVE THIS CAR HOME ANYWHERE,GUARANTEED NO PROBLEMS!!!!!...I WILL GLADLY HELP WITH DELIVERY AS MUCH AS POSSIBLE. I GO TO NORTH CAROLINA OFTEN, I COULD HELP THAT WAY WITH MY COST ONLY.  THANKS FOR LOOKING. FELL FREE TO CALL ME WITH ANY QUESTIONS.  RAY