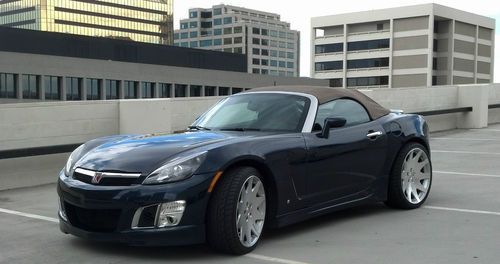 Condition: UsedA vehicle is considered used if it has been registered and issued a title. Used vehicles have had at least one previous owner. The condition of the exterior, interior and engine can vary depending on the vehicle's history. See the seller's listing for full details and description of any imperfections.Seller Notes:"Excellent condition, accelerates and handles like a new car."

Rare Saturn Sky Redline - 1 owner in excellent condition - Midnight Blue w Tan/Black leather interior and Tan convertible top. Upgrades include body kit, high output and clarity stereo, Lo Jack, exhaust tips, and MRR 20" rims w low profile high performance tires and struts. Dealer installed new turbocharger, and performed an preventative engine rejuvenation in 2012, so this car runs and handles like new and cannot be judged by the 113K mileage. Do your research on the Sky Redline, and find a car quicker than a Corvette, with good gas mileage, which handles like a Porsche. This car is a blast to drive, and is perfect for any young man or woman going off to college.  The Sky Redline became a GM classic they stopped production after only three years (2007-2009).  Asking $17500 based on KBB plus costs of upgrades, but will consider all reasonable offers within reason in order to move the car ASAP.