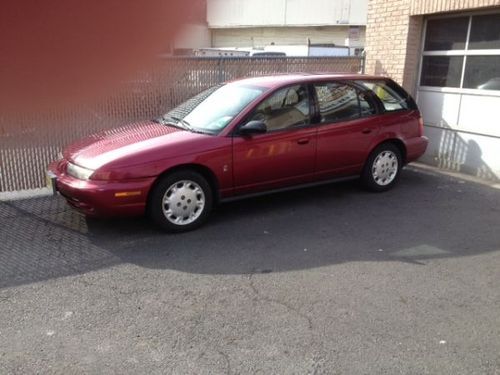 I am selling my red 1996 Saturn SW2 Wagon with 119,000 miles starting at a very low no reserve price (clean NJ title in hand). NJ inspection sticker through 2014. No dents. Paint is pretty good for its age. I spent $450 alone within the last 3 months. It has been my daily driver, until developing an engine knock 2 weeks ago when it was really cold. The day after I spent $150 for a new front tire and an oil change at Firestone in Berkeley Heights. Everything works except for right rear passenger window doesn't go down. Heater blows hot and A/C blows cold. Transmission shifts smoothly through all gears. Car tracks straight and doesn't pull when braking. No shakes or vibrations at any speed. Car never flooded or damaged.

While the engine starts up instantly even in extreme cold weather every time, there is now a constant knocking. Buyer should tow the car. One mechanic thought it is an upper engine tensioner issue while another said it is the bottom end and will need a rebuild or engine swap. It has a 1.9L DOHC 4-cylinder with automatic. Shifts smooth in all gears. Never been in an accident, drives straight, gets 24 mpg. Front wheel drive, power windows and locks. Keyless remote included. Cloth interior (no tears). Non-smoker car. Recently replaced the wiper motor (cost $300) in November. I have receipts for both recent service items. I am the second owner, was owned by a women on Long Island NY who purchased it new from Hempstead Saturn dealership.

The Kelly Blue Book Value on the car without the engine issue is over $2,000 (KBB.com). Estimated repair is $500 on the low side and $1,000 on the high side. Still below the cars value. I would have fixed the car and kept it, but have a 7 month old and pre-2000 cars don't have baby seat anchors (the LATCH type in the seat) so I want to get a newer used car. Car will need to be towed even though it runs as to avoid damaging the engine anymore. Available for inspection and viewing. Car is also listed locally and I reserve the right to terminate this auction early.

I require a $100.00 deposit via Paypal within 24 hours of winning bid. The balance in cash in exchange for when you pick up the car and I sign over the clear NJ title that I have in hand. Last bid wins.