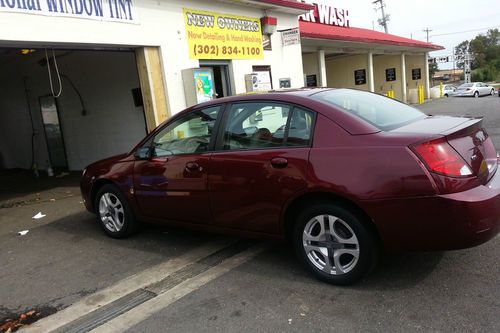 CAR IS LOCATED IN BEAR, DELAWARE

YOU ARE BIDDING ON A BEAUTIFUL 2003 MANUAL TRANSMITION SATURN ION WITH 101,640 MILES. THE VEHICLE WAS VERY MUCH KEPT UP WITH MAINTENANCE. THE CAR IS IN PERECT RUNNING CONDITION BUT HAS SOME SCRATCHES ON THE HOOD AND SIDE AS SEEN IN PICTURES. I ASK ALL TO COME SEE AND DRIVE THE CAR IN PERSON. THE VEHICLE HAS A CLEAN TITLE AND IS READY TO BE SOLD. SHOP WITH CONFIDENCE. PLEASE VIEW MY FEEDBACKS. PLEASE USE EBAY MESSAGE OR THE NUMBER BELOW TO CONTACT ME OR MAKE AN APPOINTMENT.