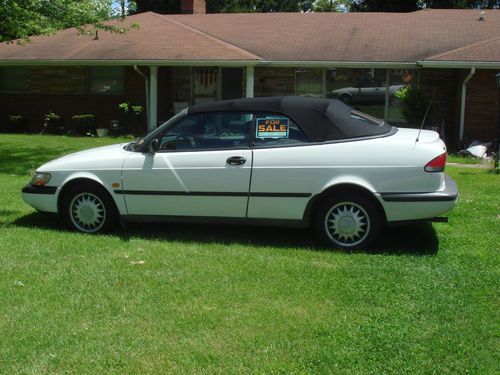 Condition: UsedA vehicle is considered used if it has been registered and issued a title. Used vehicles have had at least one previous owner. The condition of the exterior, interior and engine can vary depending on the vehicle's history. See the seller's listing for full details and description of any imperfections.Seller Notes:"small dent on drives door by the door handle as seen in pic $200.00 epair at local shop"

beautiful white saab convertible ready for summer fun runs like new, cold air, heated seats, everything works like it should.top works like new and is in very good condition no tears or wear, does not use an oil or smokes or leaks. just took it on a 400 mile trip and was great at 28 miles per gallon. i bought a new saab convertible the only reason to sell, just put new tires on 2 months ago not thinking about selling, but too many cars. you wont be sorry

any questions be glad to answer  only problem is the small dent on drivers door seen in pic the shop will repair for $200.00 at the right price we can have it repaired.