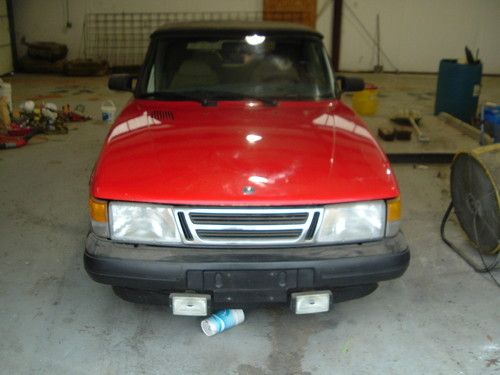 Nice, Turbo convertible, needs engine replaced and comes with a used 2.0 Turbo engine with less than 100000 miles on it. Body in good shape with one damage on left rear quarter. Top has been replaced and stored inside since. Seats redone,imaculate crack free dash,spg gauges,Kewood stereo with cd changer in trunk.

Much work done to car including both front axles replaced, turbo replaced, engine in car has recent timing chain and gears ,guides and oil pump, brakes

Numeruos extra parts go with this car including a realy nice spoiler,bumpers,and lots of switches, lights and instrument clusters

Engine skid plate with car along with a new battery heat sheild.

Have a factory service manual and parts catalog

According to the Associated Press, a Hong Kong-based concern is close to building new Saab models. After some delays, National Electric Vehicle Sweden (NEVS) has completed the purchase of bankrupt Swedish automaker Saab.
NEVS says it plans to debut an electric vehicle in about 18 months. When the car comes to market, it will wear the Saab name, but not the marque's well-known griffin logo. Reuters reports that the company will produce EVs based on the Saab 9-3 platform, with intentions to sell these vehicles primarily in the Chinese market. Due to the continued use of the distinctive griffin head logo by commercial truckmaker Scania and the Saab aerospace group, NEVS was only granted access to the Saab name, not its emblem.