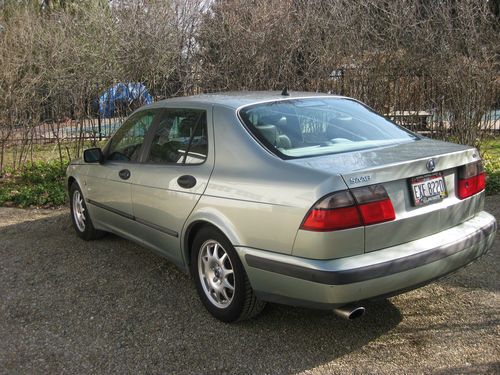 Used 2001 Saab 9-5 in good condition. Rare metallic green exterior color. Tires have plenty of life left in them (Brand: Continental). Reliable transportation. Clean car, little to no rust. Typical minor scrapes and scratches that you would expect on a 12 year old car. There are a few minor issues you should be aware of: there is a cracked fog light on the driver's side; the dashboard facia has slight cracks, the radio display has pixel loss as well as the air conditioning display (typical in these early model Saabs); however both still work fine. Comes with replacement air conditioning display unit if it bothers you. Relatively new turbo charger, new brakes and rotors. All services are up-to-date with recent oil, filter, and transmission fluid replacements. Overall, drives well and is a great commuting car. Passed all Ohio inspections. Non-smoker. Feel free to contact me with any questions. Happy Bidding!