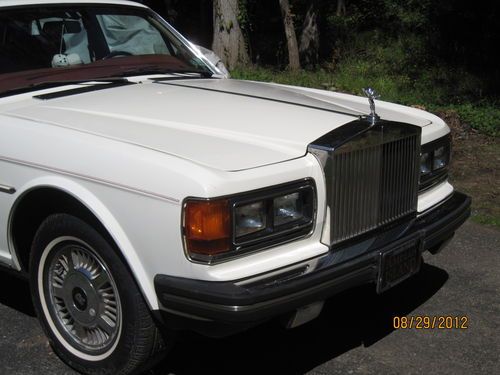 Here is my 86 Rolls Royce Silver Spirit. Alpine white over deep red leather and wood interior. I have owned this car a long time. 10 years at least. Factory R/R Chrome wheels. Factory phone. Folding wood picnic tables in the back seat. Beverly Hills custom dealer ordered car when new. Cost over $120,000 new back in 1986! The car still has the "Look" today. Body, interior and paint are original and in very good condition. I used to drive this car to work, dinner parties, shows, ect several times a week and the car never let me down. About 5 years ago, I parked it in my garage and have not used it since. Everything worked fine on the car when I parked it. I start it once in a while and back it out of the garage to wash the dust off then I park it again. It still starts right up with a charged battery, however, I would not chance driving the car again until everything was checked over by a Rolls Royce service man just for the fact that the car has not seen the road in a long time. These are current photos I took of the car last summer. I would say it's going to at least need a full service before you try to drive it. As I said, the car is in good condition, however, do not expect to jump in and drive it home. Again, the car never let me down but since it's been sitting for 5 years, it would be wise to bring a trailer. After thinking it over, I just do not have the time to enjoy this car anymore, I am building a new house and we have two new babies so the money will help finish the house. My reserve is more than fair. The reserve is lower than you might think and I really want the Rolls to go to a good home. The car has a little famous history to it. A current and now famous reality show star rode to their prom in this car before they became known! I was the driver. I will disclose this information only if you ask. This is alot of car for the money. Serious bidders only. Ebay is not a game. It takes time and money to run an auction. If you bid, be for real please. If you bid and win, you own the car period. If you are new to Ebay and do not know the rules of bidding or, if you have little or zero feedback, please contact me first before you bid. I reserve the right to remove a fishy bid. My feedback is 100% Positive since I signed up on Ebay over 10 years ago. Thank you for your interest.

Rolls-Royce Director of Global Communications Richard Carter tells me that his storied employer is "a company that does not chase volume." In a perfect world, mused Carter, the carmaker would sell "one less" of its ultra-luxury vehicles than the fast-expanding world market demands.
And, thanks in no small part to the unprecedented success of the Series I Rolls-Royce Ghost that launched in 2010, the Brit brand seems well positioned to strike that perfect balance between exclusivity and record profits. In 2003 (the year in which the first BMW-backed Rolls rolled off the line in West Sussex), the company managed to sell around 500 cars. This year, with the first run of already-back-ordered Ghost Series II models still weeks away from delivery, the marque will top 4,000 units for the first time in its history.
Considering that each one of those "units" - a somewhat unsatisfying term for motor car this special ­- will gross Rolls-Royce $300,000 if we're being very conservative, you'll quickly see that creating a very desirable product for one of the best brands in the world negates the need to chase volume. The rich and free-spending are chasing this Ghost, instead.

The wheeled monolith above is the 2013 Rolls-Royce Phantom Extended Wheelbase - a rolling demonstration of the real definition of "More." For that reason we can use it as a symbol of the firm's sales, which have not only achieved 'more' for the past three years but have also broken company records. Adding to its record-setting years in 2010 and 2011, the Goodwood-based carmaker moved 3,575 units, an increase of 38 over the year before.
The US retook its crown as the greatest consumers of Rolls-Royces, snagging it back from China. Other market movers were the Middle East, where sales rose 26 percent, Mainland Europe - the same place where mass-market makers are drowning in woe and inventory - that rose by 21 percent, and the Asia Pacific region and its 18-percent rise. Rolls-Royce is probably making more money on its cars, too, with bespoke uptake reaching 95 percent on the 10-year-old Phantom line and 73 percent for the Ghost line.
With a just-refreshed lineup and one or perhaps two more models coming, the indicators for more upward sales movement are strong, even if we don't know how soon the new models will arrive. For 2012, the brand that sells more cars above $200,000 than any other proved the saying that storms can't affect you when you live above the clouds. The press release below has more to say about the record year.