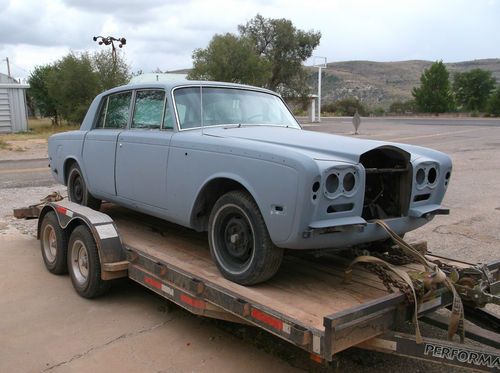 Condition: UsedA vehicle is considered used if it has been registered and issued a title. Used vehicles have had at least one previous owner. The condition of the exterior, interior and engine can vary depending on the vehicle's history. See the seller's listing for full details and description of any imperfections.Seller Notes:"Rust free body in primer motor not running please see detailed description."

YOU ARE BIDDING ON A 1971 ROLLS-ROYCE SILVER SHADOW SEDAN LEFT HAND DRIVE. THIS IS NOT A COMPLETE VEHICLE AND IT IS NOT IN RUNNING CONDITION. YOU ARE BIDDING ON A RUST FREE BODY THAT IS IN PRIMER READY FOR PAINT. THE CAR HAS A CLEAN NEW MEXICO TITLE. THE CAR HAS ALWAYS BEEN IN THE SOUTHWEST SINCE NEW AND THAT EXPLAINS THE RUST FREE BODY. THE SILVER SHADOW WAS UNDER RESTORATION AT A SHOP HOWEVER THE RESTORATION WORK WAS NEVER COMPLETED. THE CAR STILL HAS THE MOTOR HOWEVER THE MOTOR IS NOT COMPLETE - MISSING ITEMS INCLUDE THE RADIATOR, DISTRIBUTOR, CARBURETORS, AND OTHER SMALLER ENGINE COMPONENTS. THE TRANSMISSION IS STILL IN THE CAR AS WELL AS THE REAR END. ALL FOUR WHEELS AND TIRES GO WITH THE CAR. ALL THE GLASS AND CHROME THAT YOU SEE ON THE CAR IS IN GOOD TO VERY GOOD CONDITION. THERE ARE NO BUMPERS, NO GRILLE, NO FLYING LADY HOOD ORNAMENT, NO INTERIOR, NO DASH OR DASH COMPONENTS. THE CHROME ITEMS THAT GO WITH THE CAR ARE THE CHROME ON THE WINDOWS, CHROME ON WINDSHIELD AND ON REAR WINDOW. IF YOU HAVE A RUSTY BODY ON YOUR SILVER SHADOW THIS IS THE PERFECT TRANSPLANT PLUS IT GIVES YOU MANY EXTRA PARTS. PLEASE EMAIL ME IF YOU HAVE ANY QUESTIONS.

SHIPPING IS THE BUYERS RESPONSIBLE HOWEVER I WILL BE WILLING TO HELP WITH A SHIPPING QUOTE. THE BUYER WILL HAVE AMPLE TIME TO HAVE THE CAR PICKED UP. I WILL SHIP INTERNATIONALLY.

A limited-edition Rolls-Royce Phantom is something of an oxymoron. The company only sold 3,630 cars last year, and even fewer of those were its flagship Phantom. However, that isn't keeping the company from regularly revealing even more limited editions of its already hyper-exclusive cars. This is precisely the case with the new Phantom Drophead Coupé Bespoke Waterspeed Collection, a forthcoming model limited to 35 examples.
The special models are inspired by a famous speedboat race on September 1, 1937, between the United States and Great Britain on Lake Maggiore on the Swiss-Italian border. The British fielded the Bluebird K3 hydroplane boat powered by a massive supercharged V12 Rolls-Royce R-Type engine with Sir Malcolm Campbell at the helm. All that displacement shot the sleek watercraft to 129.5 miles per hour, claiming a new world waterspeed record in the process.
For the special commemorative Drophead Coupé model that celebrates "a seminal act of British daring and endeavor," Rolls-Royce is finishing the convertible in Maggiore Blue paint with a brushed steel hood and tonneau cover, along with inlaid wood trim. Rolls is not announcing an official release date or price for the special cars yet, but they are going on sale before the end of the year. Scroll down for the whole story about the car's inspiration.

It's not often that we get to talk about a new Rolls-Royce, what with the fact that the company's current model line is basically made up of two vehicles. But that all changes here at the 2013 Geneva Motor Show, with the introduction of what might be the most emotional Roller of modern times, the Wraith.
The new two-door Rolls is effectively a Ghost coupe, and it stands to reason that this is Royce's answer to the Bentley Continental GT, albeit at a higher price point. Much higher, actually - the 245,000-euro - $320k USD - price of entry for the Wraith is about $100,000 more than a Continental GT Speed coupe. Woof. And to our eyes, all that extra money isn't buying you much in the looks department, as the collective opinion of the Autoblog editors on-site in Geneva is that it's more imposing than elegant.
But the Wraith will no doubt be a special, exclusive, impressive machine for anyone who plunks down that sort of cash. For starters, it's powered by a V12 that puts out an impressive 624 horsepower and 590 pound-feet of torque mated to an eight-speed ZF "Satellite Aided" transmission. This nifty cog-swapper actually works with GPS to not only pre-select the right gear for the portion of road you're on, but for the next portion of you'll be driving on, as well. That, friends, is cool.

Neglected Rolls-Royce Phantom may be the saddest of all time

Rolls-Royce prides itself on exemplifying the pinnacle of automotive elegance. The brand is synonymous with quality and luxury. However, in the end even a Rolls is still just a car, and if you don't keep it up, it's bound to fail. That deterioration can be seriously fun to watch, though.
This 2005 Rolls-Royce Phantom might now be one of the worst cars on the planet and only has a little over 95,000 miles on it. The video claims that the original owner in New Jersey didn't make payments on the car for three years but rented the sedan out to people and used it for a livery service. Now, it's repossessed and would probably cost more to fix than it's worth.
This Phantom has had a hard life. We don't want to spoil too many of the broken pieces because they pile up to become increasingly absurd. However, the pièce de résistance must to be the broken Spider-Man umbrella in the door.