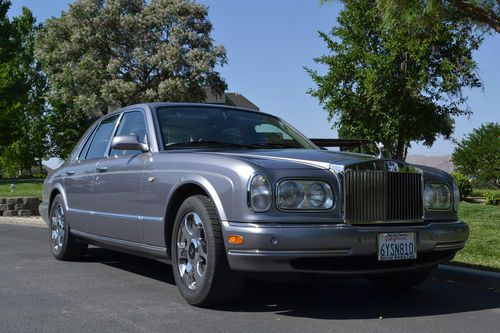 Condition: UsedA vehicle is considered used if it has been registered and issued a title. Used vehicles have had at least one previous owner. The condition of the exterior, interior and engine can vary depending on the vehicle's history. See the seller's listing for full details and description of any imperfections.Seller Notes:"Car is in very good condition, leather is very nice and there are no stains or rips, New Sheepskin Rugs,new batteries, new tires, new window motor. there is a tiny amount of corrosion on the wheels. no scratches or dents"

This was Rolls Royce' First All New Model since the introduction of the Silver Shadow, (30 Years) and only the 9th new model in their 106 year history.
Theoretically, the car is also the "Father" of the new Phantom as it directly precedes it. It is Powered By BMW's  multiple award winning M73 V12 Engine (Ward's 10 best engines 1998, International Engine of the Year 1999)
The Engine is so smooth at idle that you can balance a nickel on top of the engine and it just stays there!
It uses a heavy duty 5 speed automatic transmission built by ZF that is incredibly smooth
The Price New of these 2000 models without options was $219,000. mine has the leather Headliner which, I believe is a 10k option. Mine Has 18" wheels that were available on this model if you ordered the Carbon Ceramic Brake Rotors, however it has the normal brake rotors.
This car is a 2 Owner vehicle if Dealers are not included. There have been three dealers between the original owner and myself. the Original owner moved the car from Florida to New York and then back to Florida and then to Texas and then back to Florida and traded it in in Early 2012 to a dealer who sold it at the Manheim Auction. A dealer in Fla. bought it and then put it on ebay. My Friend in San Luis Obispo who is a dealer( British Sports Cars) bought it and then sold it to me with 41900 miles or so. in Dec. 2012.
It has Been A great car and absolutely reliable. When you drive this car, you can expect special treatment at Hotels, Country Clubs, Restaurants and places with Valet Parking.
Check out a video review of the Silver Seraph by the British TV show Men and Motor on YouTube (channel: Menandmotor)
these cars have an ALPINE Stereo System with CD and CD Changer and Navigation.
these Cars use REGULAR BRAKE FLUID (DOT 4) instead of the Old School Mineral Oil that the older cars use.
this car will do the 0-60 in 6.9 seconds and stop from 60-0 in 3 seconds. (amazing for a 5000lb car!)
these cars have a 50/50 front to rear weight balance which really is nice in the corners. Winding Roads are a Pleasure with this car.