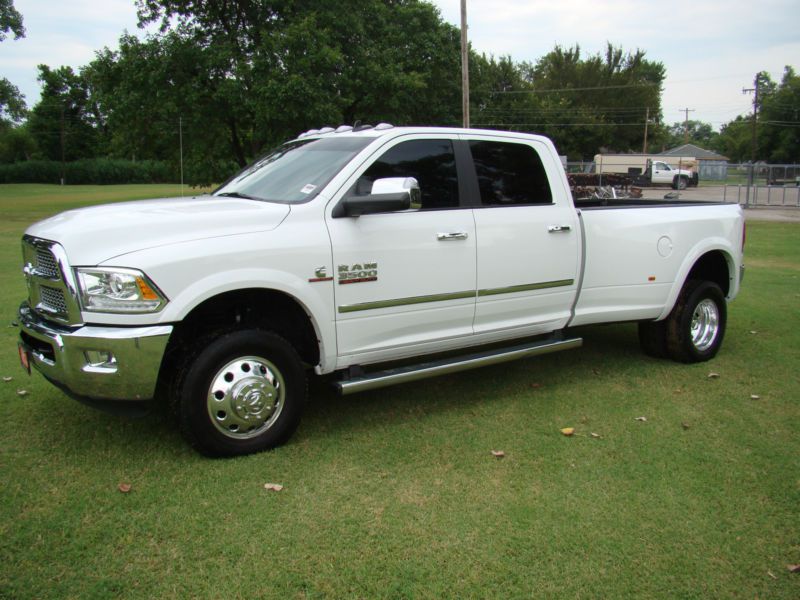 LIKE NEW 2014 LARIMIE CREW 4X4 Cummins High Output 850 ft torque engine and Asin HD 6 speed transmission. Front and rear seats heated and front seats cooled,Limited slip rear differential, 3.73 rear axle,trailer brake control factory built in,key less entry,security alarm,cruse control,power locks and windows,automatic headlamps with auto dim,heated trailer tow mirrors,back up camera,rear sensors,even with all that my help was still able to back in to a pole,duel zone air conditioning,navigation,10 way power driver seat and 6 way power passenger seat,heated steering wheel,polished aluminum wheels,rain sensing wipers,exhaust brake,chrome running boards,power adjustable pedals.AND THE RADIO ! it has 9 speakers and a amp but it can also be a mobile hot spot, you can just about control any thing in the truck on its screen and you can hook up your smart phone to it and start the truck from across the country if you wanted but you need to be more computer savvy than I am to do that! It also has a B&W flip over goose neck hitch.

Ram's new, Fiat-derived cargo van, the ProMaster, is set to be recalled over concerns that the accelerator pedals could stick. The issue affects 9,655 ProMasters, with 7,935 vans in the US, 1,437 vehicles in Canada and 283 in Mexico.
There have been no reported injuries or crashes from the issue - according to The Detroit News, there haven't even been any customer complaints. The issue was reportedly discovered while Chrysler was testing the vehicle at its proving ground, which is what prompted the internal investigation. Still, it's unlikely that ProMaster vans will suffer from unintended acceleration issues, as each van is equipped with a brake-throttle override.
As of this writing, there's been no bulletin or activity from the National Highway Traffic Safety Administration.