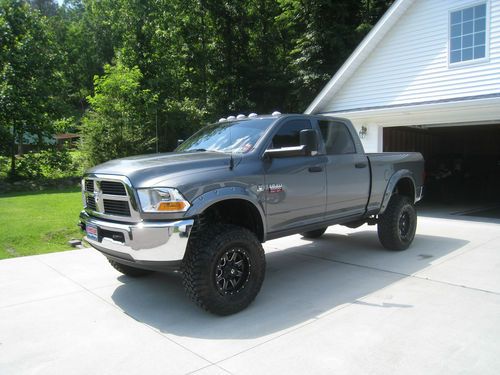 Truck has never been on anything rougher than a gravel road.  Absolutly no off-roading / 4-wheeling / mudding,  Immaculately kept, as the photos show.  No leaks, squeaks, dents, no issues whatsoever.

Note: CB Radio and radar detector seen in photos is NOT included.

Ahead of a new Ram Heavy Duty that will debut sometime next year (check out the spy shots below), Chrysler and Cummins are celebrating a milestone in a 24-year partnership that has supplied the Ram pickup with diesel engines.
In its early years, the Cummins straight-six turbo diesel was rated at just 160 horsepower and 400 pound-feet of torque, and its clattering 12 valves could be heard from a mile away. Its most recent configuration still uses a straight-six layout, but displacement grew to 6.7 liters in 2007 allowing the engine to now produce up to 385 hp and a whopping 850 lb-ft of torque. While a rumored smaller Cummins engine for use in the light-duty Ram 1500 never materialized, the work-ready 6.7-liter Cummins turbo diesel accounts for 80 percent of all Ram HD sales.
Chrysler has not yet announced when and where this two-millionth engine will be on display, but you can read more about the engine and the partnership in the press release below.

An argument could be made that Chrysler already offers a competitor to the much-loved Ford Raptor in the form of the Ram Runner pickup. The difference, though, is that Ford builds the Raptor right on the production line, whereas Ram requires the buyer to have modifications made at one of its dealerships after the initial purchase is made.
That distinction may soon be a thing of the past, according to a report from Wards Auto. "If we could see that the volume was significant enough that it makes sense to do it, we'll do it," says Pat Dougherty, vice president of Mopar parts, sales and field operations. "But if we don't, then we'll continue to do it the way we do it."
Additionally, Chrysler would reportedly like to put more emphasis on the fuel efficiency of its off-road-ready lineup, which is spearheaded by the Jeep Wrangler. Says Dougherty, "For a lot of the people who go off-roading (but) actually drive their vehicle as a daily driver, they want to make sure they're getting fuel efficiency while they're driving to work."