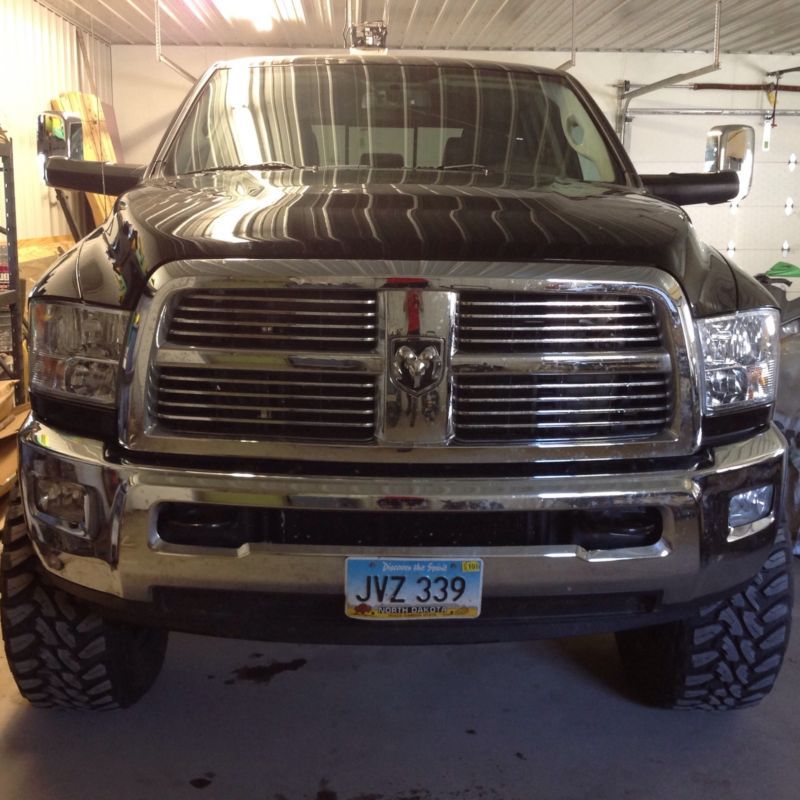 For more pictures email at: carmencmmaontesano@coventryfans.com .

I'm selling my 2012 Dodge 3500 Megacab 6.7L Diesel. I bought this pickup less than two years ago from Watts
Automotive in Utah. If you haven't heard of them, do an Internet search. They specialize in high end vehicles. I
bought this pickup to pull my wakeboarding boat. All miles are highway miles, never been driven on gravel. When I
bought this pickup it had just got the lift kit, tires, and rims. This is an adult owned pickup and has never had a
programmer. I only used this pickup a few months out of the year, it sits in my heated garage when not being used.
It has heated and cooled seats, navigation, backup camera, reclining rear seats that also fold down, heated
steering wheel, power rear window, alpine factory sound system, it also has a hide a ball fifth wheel hitch in the
box, although I never used it. It has Amp running boards that fold down when the door opens, and they go up when
the door shuts. The 37 inch tall tires still look new. The pickup rides and handles very well with the 6 inch lift
kit. When pulling my boat to storage three days ago I ended up getting a cracked windshield, I haven't taken it in
yet. This is the only thing this pickup needs, it's been very well cared for and maintained.

Ram Trucks CEO and President Reid Bigland got his turn among the executives elucidating the near-term futures for brands in the Fiat Chrysler Automobiles umbrella, laying out the plans for both Ram trucks and Fiat Professional. After Bigland said that the company "will continue to invest heavily in commercial vehicles" for the Italian arm, he didn't give many specifics as to where that investment would go. What we do know for now is that a new Fiat Doblo will come next year - that's the truck we've been catching spy shots of and that will be the basis for the Ram ProMaster City.
In 2016 will come the next-generation Fiorino, a small cargo van sold in markets outside the US as a Fiat, as the Citroën Nemo and Peugeot Bipper. The European and South American markets will also get a new midsize pickup that same year.
Bigland's goal for Ram Trucks and Ram commercial is just a touch more ambitious: "Build the best pickup trucks and commercial vehicles in the industry" and increase NAFTA-market sales from 463,000 in 2013 to 620,000 in 2018. The waypoints along that road include a refresh for the Ram 1500 in 2015 and then a brand new 1500 to come two years later in 2017. Bracketing that, a refresh for the Heavy Duty lineup happens in 2016, and two years later it will also get an all-new generation.