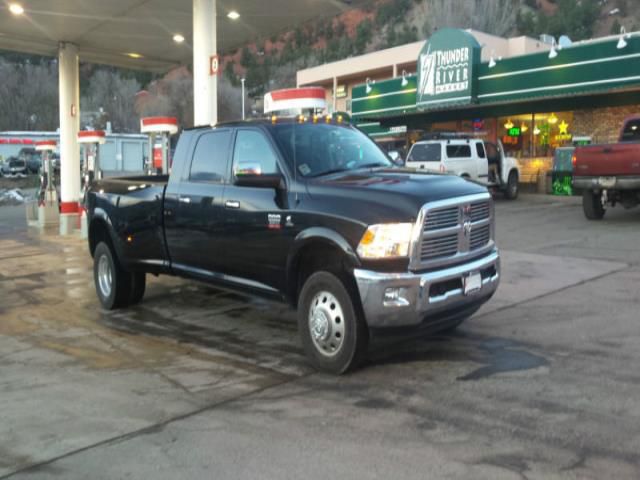 2012 Ram 3500 Laramie Megacab Long Bed. The Paint Is Also A Metallic Black That Was Not Offered After 2011. It Has Electric (amp) Running Boards And A B&w In-bed Hide A Hitch. I Also Just Replaced The Tires. Smoked Led Tail Lights, Smoked Roof Clearance Led's, Smoked Led Bed Side Markers Lamps. I Ordered This Truck Brand New With Every Available Option.

In the past few months, Chrysler's Ram brand has gone from also-ran status behind Ford and General Motors to a class leader in many truck categories including fuel economy (25 miles per gallon highway) and towing (30,000-pound maximum capacity). Now, based off these spy shots recently taken, it looks like Ram is preparing to introduce the be all and end all of pickup trucks, with a production version of its leviathan 2011 Long-Hauler Concept.
Our spy shooters recently caught the two-year-old concept truck running around Auburn Hills, MI covered in stickers that would indicate the truck could be testing for a production model, and last we heard back in September, Chrysler has been trying to build a business case for the massive hauler. On the other hand, seeing as how the only changes made to this truck since it was first unveiled are a full factory tailgate and various Mopar accessories (mud flaps, exhaust finisher and bed step), it doesn't appear that any changes have been made that fit in with the recently announced 2013 Ram HD models.
As a refresher, the Long-Hauler rides on the 197.4-inch wheelbase of the Ram 5500 chassis - usually reserved for stake or box trucks - allowing it to combine the luxury of the Mega Cab with the cargo capability of an eight-foot bed and enough room in between to fit a 60-gallon reserve fuel tank. This, along with the 50-gallon, in-bed fuel tank and the truck's factory fuel tank means that the Long-Hauler has the ability to carry 162 gallons of diesel fuel - enough for one incredibly long haul.

Terry Box, a writer for the Dallas Morning News, was tootling down the Dallas North Tollway in a Ram 1500 Laramie Longhorn pickup after work and enjoying the ride. Box thought the $53,335, option-filled press loaner had been "flawless - very serious competition for anything built by Ford or Chevy." And then, for reasons that still aren't clear, something in the engine compartment caught fire and the Ram cremated itself on the shoulder of an off-ramp.
Box tells the story and it isn't an indictment of the truck, but a cautionary tale about how new vehicles don't burn like the old ones did - and why not to go back for your gym bag. It could also be a kind reminder about what kind of safety gear everyone should keep in their cars. Click the link to read the whole piece.

The current-generation Ram 1500 is entering its fifth year on the market, but Ram's half-ton truck is not showing its age whatsoever. While we continue to wait for the fuel economy figures for the all-new EcoDiesel V6, Ram has released towing figures for trucks equipped with this new engine, as well as models fitted with the upgraded gasoline-powered V6.
The EcoDiesel - a $2,850 option - will help the Ram compete with V8-powered trucks with its max towing capacity of 9,200 pounds, which is just 50 pounds shy of the 2013 Ram 1500 with the 5.7-liter V8. The true benefit here is that the diesel should return impressive fuel economy in the process, and even though official estimates have yet to be released, Chrysler has promised that it will achieve more than 25 miles per gallon on the highway.
But even with the Pentastar 3.6-liter V6, upgrades to the eight-speed automatic transmission have resulted in an increase in towing capacity, now up to 7,450 pounds. This number is expected to be best in class for base-engine trucks.