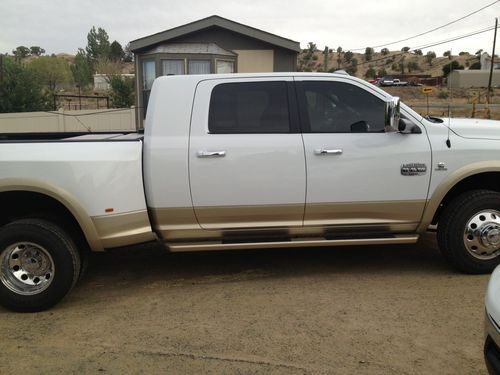 Im selling my 2012 Dodge Laramie Longhorn Megacab DRW. I bought the 2012 so i didnt have the DEF to deal with. It has 5,600 miles on it right now, fully loaded with every option minus the rear entertainment system. When i bought the truck i was going to use it to pull around a 5th wheel and a horse trailer but it ends up sitting more then actually being used. Everything is stock and has never been chipped or modified so the factory warranty is still implied. Any other questions please feel free to ask.

Ram may be preparing a new sort of tailgate that could rethink the way we access the bed of the company's pickup trucks. Rather than the typical fold-down tailgate that we know so well, patent drawings show a tailgate that combines the functionality of a traditional fold-down design with a 50/50 split that can, individually, be opened like a barn-door design or dropped flat like a standard tailgate.
Now, Ram is far from the first to toy around with something like this. The most obvious example is the Honda Ridgeline, which features a single-piece tailgate that is double-hinged so that it can open traditionally or be swung out to the side. The big news here is the split and the fact that each half can be used independently of the other. Unlike the Honda, the individual halves would be operated via touchpads.
The implications of this new design aren't entirely clear right now. It seems possible that the rendering could just be for a concept vehicle, but production is certainly possible as well - Ram has shown a real willingness to innovate in the pickup segment as of late, with features like coil-spring rear suspensions, light-duty diesels and the Ram Box bedside storage system.