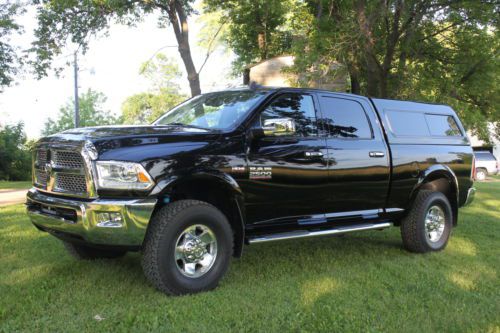 Building off of the solid base of its 1500 pickup, Ram has announced a dark horse in its stable, the Ram Black Express, which comes equipped with a bevy of features to distinguish it from the regular Express model. (Just don't call it a black sheep.)
The Black Express sets itself apart visually from other 1500s with black 20-inch aluminum wheels, black bumpers, a black grille and front fascia with fog lamps, black Ram's head badges front and rear but no side badges for a clean, shaved look. The premium bi-function halogen projector headlamps with LED running lights, which aren't even an option on the regular Express, come standard on the Black edition.
The 5.7-liter Hemi V8 is unchanged, making 395 horsepower and 410 pound-feet of torque. Paired with the standard eight-speed automatic transmission, the truck can tow 6,500 pounds. It's on sale starting this month, and the base Black Express can be had for $26,955, just $1,105 more than the base Express 4X2 regular cab. Feel free to peruse the press release below and check out the image gallery below.