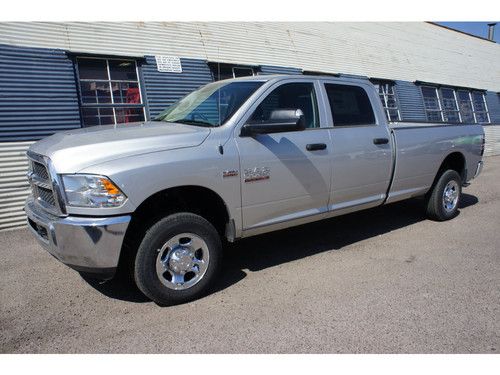 Enough Is Enough. Finally.
Not long ago, the efforts of an automaker to put a six-cylinder engine into a pickup truck went something like this: take the basic bread-and-butter V8, lop two cylinders off one end of the block and call it a day. The resulting engines were generally pretty rough around the edges, and while they were able to churn out reasonable amounts of torque, they generally weren't good at anything else. Instead of being smooth running, they shook and shimmied; in place of a quiet highway jaunt, they operated well outside their low-rpm comfort zones and sent a corresponding racket throughout the cabin. And, instead of returning significantly superior fuel economy over their V8 counterparts, they guzzled gas and spat noxious vapors out their tailpipes.
In other words, the only reason to choose the base V6 engine over an optional V8 was to save money on the initial purchase, and that usually meant you'd be driving home in a stripped-out machine and would be lucky to have power windows, cruise control and air conditioning.

Ram shows its trucks are for work and play

There are no shortage of pickup trucks at this year's SEMA Show. The popular platform has been ripe for customization for years, so it should come as no shock that Ford, General Motors and Ram are all showing a fair few trucks in Las Vegas. From the Ram camp, we have two offerings - the Ram Sun Chaser and the Ram Dually Case Work Truck.
The Sun Chaser opts for a beach theme, similar to the Fiat 500 Thalassa. Based on the Ram 1500, the Sun Chaser wears Vibrance Orange Blast and Brilliant Black paint, and sports a Mopar roof rack, while the Ram Box system features a water tank and a shower head allowing beach-goers to rinse off before getting back in the truck. A flip-up, seat-back tailgate makes sitting on the back of the truck a bit more comfortable, and it's the kind of cool feature we can see becoming an optional item in the future.
The Sun Chaser mods are rounded out by 17-inch deadlocked wheels, a two-inch lift kit and a Mopar exhaust for the 5.7-liter Hemi V8. The cabin, meanwhile, sports Katzkin leather seats and even more Vibrance Orange Paint.