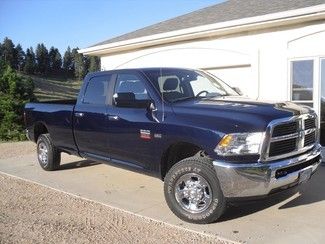 The newest Ram Power Wagon is arguably the most imposing vehicle to be shown at the 2014 New York Auto Show, boasting a number of new aesthetic features, as well as a new graphics package.
Ram added a 6.4-liter V8 as an optional engine for 2014, but in the Power Wagon, it's the sole powerplant, boasting 410 horsepower and 429 pound-feet of torque. An equally robust six-speed automatic backs up the brawny engine, while 4.10 gearing, an 11.5-inch rear axle and electronically locking front and rear diffs come standard.
A new five-link coil rear suspension and Bilstein monotube shocks should deliver a pretty comfortable ride, while the Power Wagon's off-road ability is complemented by the new Articulink system on the front suspension, which offers electronic sway-bar disconnect. 33-inch Goodyear rubber comes standard.

Ram may be preparing a new sort of tailgate that could rethink the way we access the bed of the company's pickup trucks. Rather than the typical fold-down tailgate that we know so well, patent drawings show a tailgate that combines the functionality of a traditional fold-down design with a 50/50 split that can, individually, be opened like a barn-door design or dropped flat like a standard tailgate.
Now, Ram is far from the first to toy around with something like this. The most obvious example is the Honda Ridgeline, which features a single-piece tailgate that is double-hinged so that it can open traditionally or be swung out to the side. The big news here is the split and the fact that each half can be used independently of the other. Unlike the Honda, the individual halves would be operated via touchpads.
The implications of this new design aren't entirely clear right now. It seems possible that the rendering could just be for a concept vehicle, but production is certainly possible as well - Ram has shown a real willingness to innovate in the pickup segment as of late, with features like coil-spring rear suspensions, light-duty diesels and the Ram Box bedside storage system.