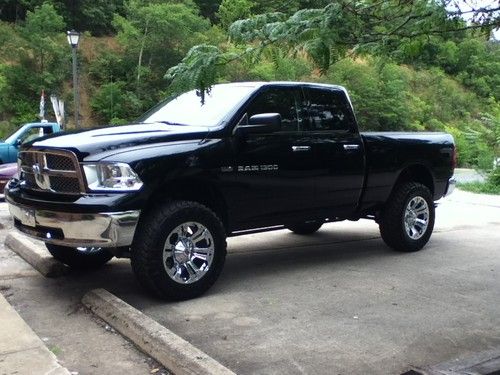 Condition: UsedA vehicle is considered used if it has been registered and issued a title. Used vehicles have had at least one previous owner. The condition of the exterior, interior and engine can vary depending on the vehicle's history. See the seller's listing for full details and description of any imperfections.Seller Notes:"This vehicle's in GREAT shape! An AMAZING eye turner!!"

I am selling my 2012 Dodge Ram 1500 Quad Cab. I have invested over $10,000 in aftermarket items on this beauty. This magnificent 4x4 is powered by it's 5.7 Hemi! This is my dream truck, however I gotta let it go. My wife and I are expecting and we're trying to eliminate the payment. This truck is truly an amazing machine and whoever buys this truck will definitely be pleased!

Listed below are the modifications I've done to the truck. All modifications have been install by a local professional shop that specialize in lifting trucks.
-6" BDS Lift (with lifetime no fine print warranty)
-Brand new 35x12.50x20 Nitto Trail Grappler Mud tires
-Chrome 20x10 XD Monster Wheels
-Best Top Power Steps w/ LED Lights (3 Year Warranty)
-Chrome OEM Grill
-Flowmaster Dual Exhaust
-Level V Towing Hitch
For an additional $300.00 I will include the following:
-Retrofit Projected Headlights with 6,000k HID Bulbs
-LED Registration Lights
-Husky Liner Professional Fit Floor Mats
-Halogen Reverse Lights attached to the Level V Tow Hitch
All items listed above have only approximately 800 miles on them.
-There is a small scratch on the grill and a small dent on the bottom of the truck under the front passenger door. Both are hardly noticeable. Other than that the truck is in MINT condition.