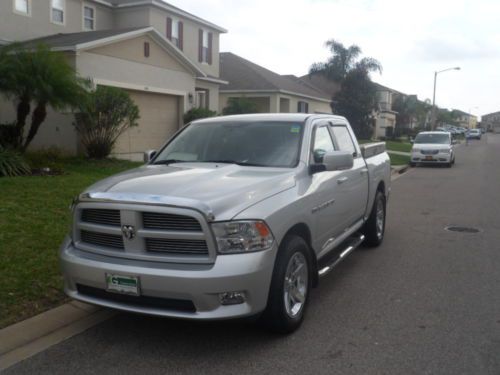 Chrysler first introduced us to its Ram Runner exactly two years ago at SEMA, but for buyers of this Raptor-like truck who don't want to go through dealerships for the upgrades, VWerks has just the thing. Looking every bit as mean as the dealer-built Ram Runner, the VWerks Ram KTS gets a wide-body treatment and upgraded off-road performance suspension similar to its Mopar contemporary.
Starting life as your everyday Ram 1500, the Ram KTS on display at SEMA features a beefed-up KORE long-travel suspension system and off-road tires that allows the truck to tackle tough terrain at high speeds. From there, VWerks also added wider front and rear fenders, matte black 17-inch wheels and a Flowmaster performance cat-back exhaust system. For buyers looking for the rough and rugged look of the KTS but not needing the high-speed, off-road abilities, VWerks also offers the Baja Series kit that replaces the performance suspension system with a set of 20-inch wheels.
The VWerks Ram KTS and Ram Baja Series kits are available on any 2009 through 2013 model year Ram 1500, but there is no word on pricing for either kit yet. Scroll down for more information about both kits, and check out the KTS in our live gallery above.