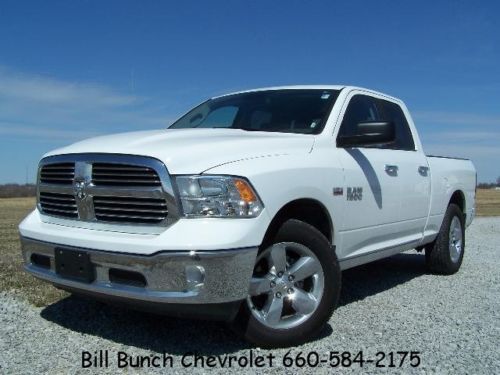 According to the National Highway Traffic Safety Administration, Chrysler is issuing a recall of 30,197 pickup trucks in the United States, all from the 2013 model year. The affected vehicles are the Ram 1500, 2500 and 3500, all of which were built between September 9, 2012 and March 5, 2013.
The problem affects models equipped with "optional premium taillamps," and according to NHTSA, the turn signal indicator "may not flash at a double rate to give a notification to the driver of a turn signal malfunction." The report states that if a driver is unaware of a problem with the turn signals and continues to use them as normal, other vehicles on the road may not be alerted that the vehicle is turning, which increases the risk of a crash.
Other recall woes have affected the Ram line recently. In April, we reported that Ram 1500 models were being recalled due to an improper adjustment of the parking brake cable, and several thousand Heavy Duty models were being called in for engine covers that do not have as much heat resistance as they're supposed to.

Chrysler may have the Super Bowl's most popular commercial for a third year in a row. Eminem and Eastwood helped it earn that distinction the last two years, and while Oprah did the voiceover for this year's Jeep ad, it's Chrysler's other spot that's in the running for Most Valuable Ad after the big game this year.
So where did the Ram brand's commercial about farmers come from? As it turns out, the ad appears to be inspired, shall we say, by a video produced by Farms.com that was uploaded to YouTube in June, 2011. Greg Mitchell of The Nation pointed out the similarities between the two in an article published this morning. The video uses the same speech given by famed radio broadcaster Paul Harvey played over a slideshow of farming images. It's the same concept as Ram's ad, though the truck brand did go out and commission its own images shot by very well-known photographers for its version.
Did Ram steal the idea? That does not appear to be the case. A message left on the Farms.com YouTube video says "Farms.com is pleased to be working with Ram Trucks and support the 'Farmer' Super Bowl commercial." When you play the video, a link even pops up to watch Ram's version.