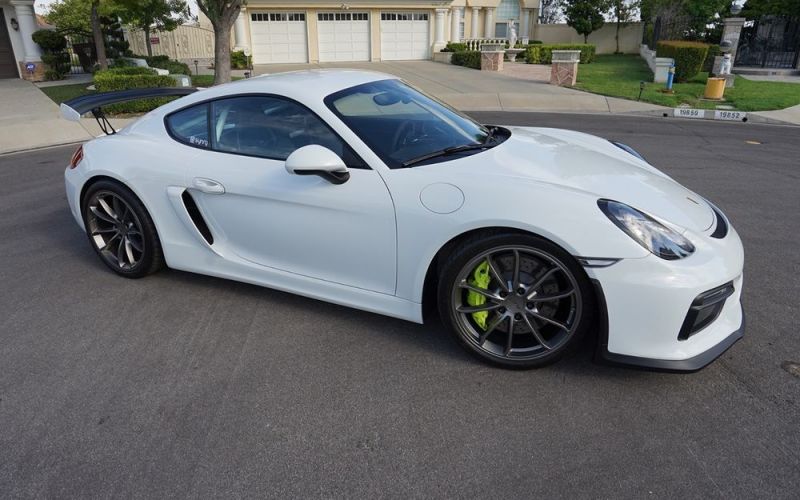 If you have more questions or want more details please email : tinytsschontz@liverpoolfans.com .

2016 Porsche Cayman GT4 in white over black interior. I'm sure if you're looking at this ad, you'll know what a special car the GT4 is and why these cars were sold out well before deliveries began.
This specific car has truly been babied, well cared for, and in perfect condition. Clean title, and zero accident
or paintwork. The car is garaged (non-smoking owner), and professionally detailed every 14 days. The GT4 has never been raced or tracked (although I'm positive this would be the car to do it in). The car's paint was also protected from the moment it was delivered to me. The car went to Adonis Details under the care of Tim Coats for his full "Track Package" XPEL clear bra protection! BBi Autosports installed their roll bar/harness bar, and their wing risers. Lastly, we installed a Vorsteiner satin carbon wing blade (end caps painted white) along with an APR carbon gurney flap (the setup mimics the GT4 Clubsport setup closely). I also had Signature Autobody paint the brake calipers in OEM Acid Green (found on 918 Spyder). The brakes were painted the right way (full removal, stripped, then repainted on all sides. Black Porsche scripts were put down before being cleared) Full break down of modifications and OEM options are listed below. The car also includes all OEM books, OEM sunshade and key. The car is also under the remaining FULL factory warranty.

Here are the mods: