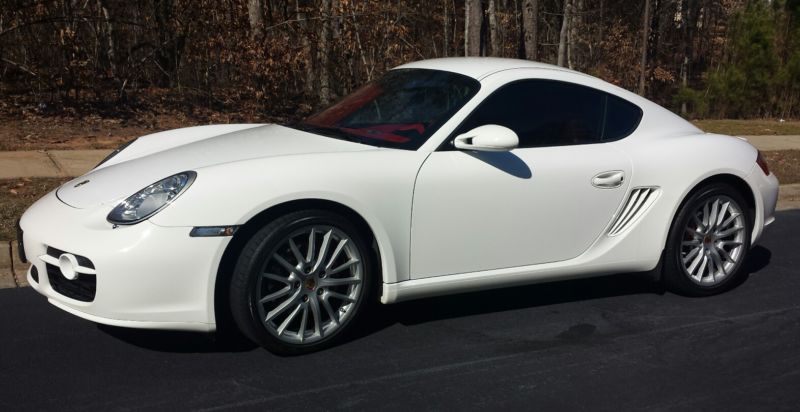 ANY QUESTIONS JUST EMAIL ME: awildaasshorter@artfriend.com .

I have for sale my 2008 Porsche Cayman S in excellent condition with 22,223 miles. The vehicle has been garage kept
and hand washed only. A recent service inspection included new spark plugs and oil change. The brake and coolant
fluids were also checked and topped off. The Continental tires have 85 to 90% tread wear remaining. The 19" wheels
are in excellent condition without curb damage. All functions (air, heat, lights, heated seats, radio, PSM, rear
spoiler, power mirrors, power seats) work properly. The 6 speed dual mass flywheel clutch engages and shifts
properly. The interior and exterior of the vehicle are in immaculate condition, I guarantee you will not be
disappointed. A $500.00 deposit is required and the remaining balance must be paid in full to my Credit Union
before delivery of the vehicle occurs. I prefer that you or your representative inspect the vehicle in person so
that you are 100% satisfied with your purchase. The vehicle does not have an existing warranty and I am not open to
trades. Thank you for your interest and kind regards.
Options List:
Carrera Red Natural Leather: $3,605
Gear / Handbrake Aluminum Lever: $1,035
Preferred Package Plus: $4,995
PCM 2.1 Extended Navigation: $3,110
19" Sport Carrera Wheels: $1,940
3-Spoke Multifunction Leather Steering Wheel: $990
Exclusive Options: (Lighted Door Entry Guards / Instrument Dials Carrera White) $1,415