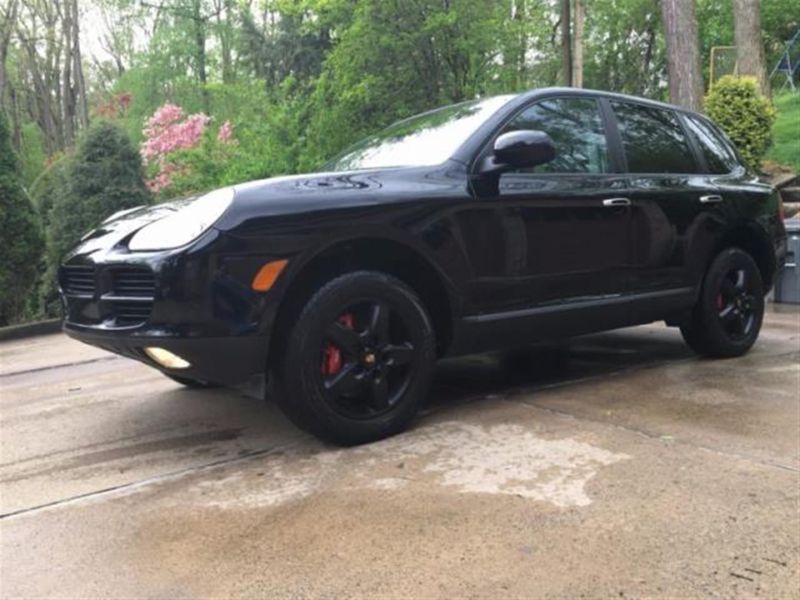 2004 Porsche Cayenne S. 8 cylinder 340 HP beast with tiptronic transmission. Great highway vehicle with all wheel and 4 wheel drive. Cooling tubes have been replaced. Second owner, black exterior with grey leather (heated seats) and black 18 Porsche turbo wheels with painted center caps and almost new tires. This SUV booked for $67,000 when new. Sold and serviced by Sewickely Porsche. 113k miles, which will go up as I love driving this vehicle. I have a newer Cayenne and prefer the look and drive of this one. Clean carfax and clear/clean title is in hand. Recent included oil change and new fuel pump and filter. Has been very reliable and I would not hesitate to drive it anywhere. Loaded with sunroof, xenon headlamps, power folding mirrors, cruise, prw seats, windows and locks. Comes with the owners manual and all the original tools for tool kit. Has Porsche factory winter mats along with the carpeted mats. Current on PA state inspection and emissions. No check engine lights, no fluid leaks. Runs like an early Cayenne should. Very fast, very heavy and a absolute beast in snow or other inclement weather. Black exterior looks great, but it is a 13 year old vehicle and does have some scratches and imperfections, but it still looks terrific. There was a chip in the windshield that was repaired by previous owner. It has not gotten worse, nor is there any cracking. We get tons of compliments and people are shocked when I tell them its a 2004. Interior is clean, non smoker. There is one small rip in the leather in the rear seat on a seam. Its not very noticeable, as I didnt realize it was there till taking the pics for this listing.
Any questions at : medinalemonikw@netcourrier.com