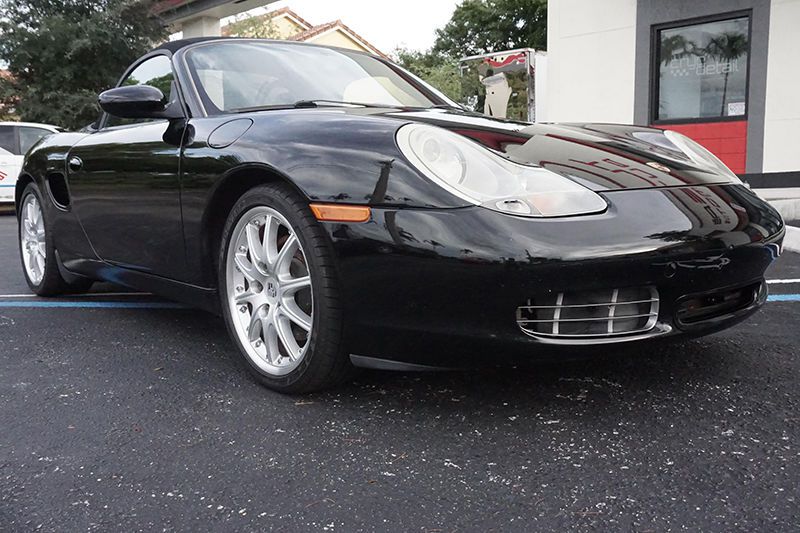 **2002 PORSCHE BOXSTER S - 6 SPD MANUAL - WITH IMS BEARING UPDATE (DIRECT OIL FEED SYSTEM)**
You are looking at a very well kept and maintained 2002 Porsche Boxster S.
The exterior of this car is in overall good condition. It looks as if the previous owners cared for the vehicle and
garage kept it. There are some small chips around the vehicle but nothing very noticeable. The car is all original
with no modifications or work performed to it. The front right fender does show some paint work that may have been
from a dent or scratch, but all other panels show original paint readings and the vehicle has no accident history.
The front bumper does have rock chips and marks from normal wear and tear driving. The rear decklid has a burnspot
(about half dollar size) on the lower left hand side. The convertible top canvas should be replaced as the rear
plastic window is not in great condition. The car is equipped with original factory HID headlamps. The car is
sitting on original 18" Boxster sport design wheels that have no curb damage.
The interior is in very good shape. A non-smoker vehicle. The carpeting is clean with no burns or physical damage.
The leather does show some wear but is not cracked or torn. Both seats have some wear marks on the center backrest.
The center console is color matched to the exterior of the vehicle. Original BOSE factory sound system is still in
place and working perfectly. All of the interior power equipment is functioning with no known issues.
This Boxster just had recent service performed to it including: engine oil & filter change, cabin air filter, brake
fluid flush, front brake pads and air oil separator. The tires were also just road force precision balanced. This
car is also equipped with the Direct Oil Feed (DOF) and new IMS bearing (a $2,500 upgrade). The clutch disc,
pressure plate, release bearing and rear main seal were also done at the same time as the DOF installation. The
tires are Dunlop SP Sport Maxx 225/40/18 front and 265/35/18 rear with about 50% tread life remaining.