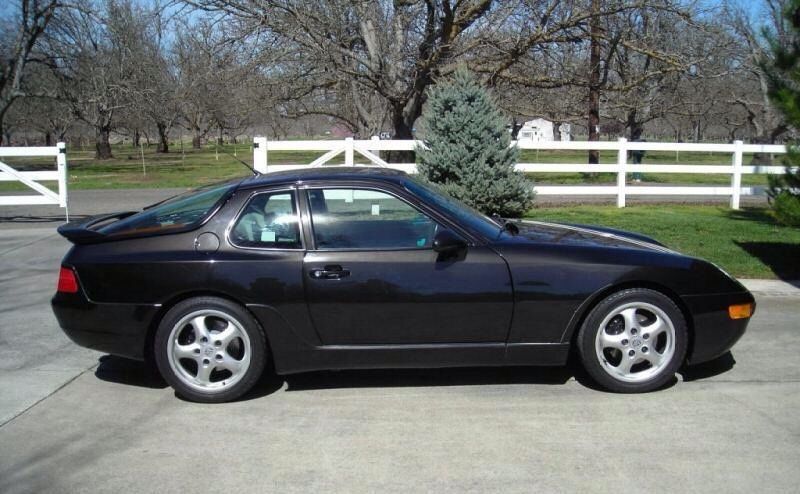 For more details email me at: karleenpittillo@juno.com .

This 1995 Porsche 968 Coupe has the most desirable six-speed transmission, along with less than 34,000 careful
original miles. There is a Porsche plaque on the passenger dash designating this to be a "Limited Edition Coupe,
120/258". As one of the last 968s made, this is an especially collectible example. The designation provides for a
few extras, including an upgraded stereo, metallic black paint, limited slip and gray leather. You can see this
plaque in the photos, as well as a Porsche Certificate of Authenticity which validates the breeding of this
vehicle. It is an original, unaltered (except for the radio) example of an exceptionally strong perfoming sports
car.
This has been my 18th Porsche of various types. The 968 is the pinnacle of the 924,944,951 lineage, but was
only produced for four years ending in 1995, and only utilizing 20% of the 944 parts in common. The 236 hp four
cylinder power plant produces 225 foot pounds, which is as much power at the standard 911 up until 1989. It rocks!
Zero to sixty is under six seconds along with an old school EU exhaust rumble. 50/50 weight distribution and
limited slip differential produces actually better handling than the 911 (and I love 911s too).
The condition of this car is impeccable. Clean carfax with no accident history. I've owned her for five or
six years and bought her from the past president of the Polish Porsche Club whom lived in CA. Prior to CA the car
resided in New Mexico. I think driven by a physician whom lived on a gravel driveway. The car is in show
condition with only very minor defects, namely stone chip repairs and a small cut in the seat (photo shows). One
chip is about the size of a dime and poorly repaired. It was covered up by a bra that I will send with the car but
didn't use myself. The seat cut is about an inch long, is superficial, and has not grown in five years.
EVERYTHING else concerning the car condition and maintenance status is excellent. Including the recent timing belt
and water pump service. She is an eye catcher and could easily be shown as is. It was recently chosen for the
cover of the regional Porsche Club magazine. The Blaupunkt Toronto CD that is installed will come with the
original cassette. Newer Michelin Pilot Sports over very, very nice cup wheels that are accurate and original.
Fully serviced and everything works like new.
There are no disappointments here. If you want the best, this is among a very few of the finest at the top of
the marque. With care, it should be a pleasing investment over time with a favorable return. I have obsessive
records for my ownership, and some from before. I'm very pleased to show the car to your inspector. I am
expecting to sell her to a collector whom recognizes the appeal to this rare type of Porsche, and welcome your
questions.