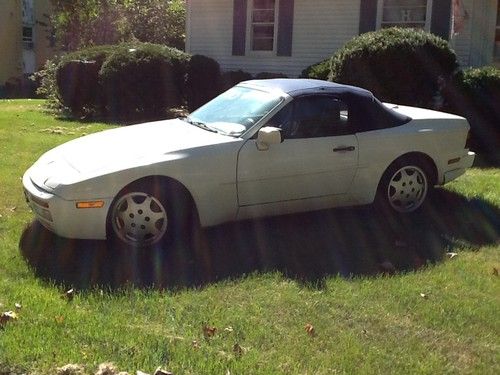 Condition: UsedA vehicle is considered used if it has been registered and issued a title. Used vehicles have had at least one previous owner. The condition of the exterior, interior and engine can vary depending on the vehicle's history. See the seller's listing for full details and description of any imperfections.Seller Notes:"Body has a few dings and marks on it. Interior has some worn leather on front seats. Needs a few interior knobs on center consul. Tires are average condition but could use replacing down the road. Porsche center caps are white. Tires do not leak air. Engine is very clean according to mechanic. He said he was very impressed with the engine and how clean it was under neath and inside the engine. He said usually he will see oil leaks under these cars but was surprised with how clean it was under ad around the engine. Interior carpet is in good condition with normal wear and tear. Has matching blue convertible boot cover for when top is down. Stereo and power front drivers seat is not working and or was disconnected before I got it. Windshield is in good condition with no major cracks or chips. These are $900 windshields for the convertible 944 s2 I was told."

Great car.  New timing belt, and water pump and pulley.  Gets a lot of looks going down the road, in town and in parking lots.  People often confuse it with a Ferrari or just don't know what kind of car it is.  Probably one of the best designed cars ever made.  Has 50/50 weight distribution and is one of the top best handling cars ever made.  It was the first car to ever have dual air bags and the 3.0 liter engine was the biggest non turbo normally aspirated gas engine made for a long time and may still be.  Engine cylinders are a massibe .75 liters per cylinder.  I have another one of these cars in a 1990 model year and I bought this one for the engine but felt bad parting it out so am selling it as a whole running car.  There were only a few of these made in 1991 in convertible and in white.  This was the last year they made any 944.  The white I have been told is more rare to come across and in the last year made.  As mentioned in the section about condition description, the body has a few dings and marks on it.  Interior has some worn leather on front seats.  Needs a few interior knobs on center consul.  I just don't have the time to spend on it. I purchased this car to put the engine in my other 944s2 cab but felt bad parting it out since it runs and drives and is in as good condition as it is so I am selling it.  Tires are average condition but could use replacing down the road.  They do not leak air at all.  Engine is very very clean according to mechanic.  He said he was very impressed with the engine and how clean it was under neath and inside the engine.  If you think of any thing else I can answer, let me know.  I just don't need 2 of these cars.  Look forward to your questions and if you want me to post another picture of something, let me know.

Would a Porsche still be a Porsche if it weren't as exclusive? That's the question which industry pundits are asking - and customers may soon as well - as the German automaker emerges from the fringe in pursuit of larger volumes.
A dozen years ago Porsche was barely selling over 50,000 units per annum. In a sales surge that has gathered pace as fast as a 911 Turbo, however, it was already hovering around the 100,000-unit mark a few years later. Last year it sold over 160,000, and has targeted 200,000 units by 2018. But it may not even take that long.
Automotive News reports that Porsche has advanced its targets to reach for 200,000 units by the end of this year or the next. The bump in sales would be driven particularly by the introduction of the new Macan, of which it aims to sell 50,000 units annually, starting next year. The Cayenne currently stands far and away as its most successful model. The 911 and Panamera have swapped second place a few times over the past five years, followed by the Boxster and Cayman.