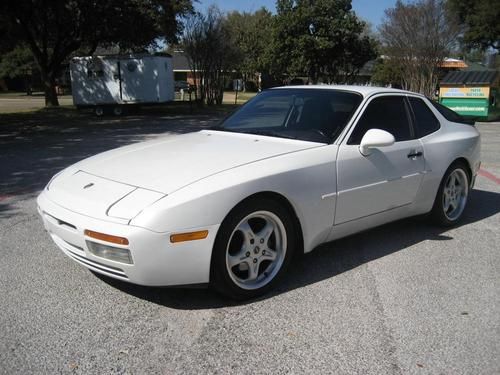 This is a 1989 Porsche 944 S2, white with red leather interior.  the car has a 3.0L engine with a 5 speed manual gearbox.  AC works good.  good wheels and tires 255/40/14 in the rear and 225/40/17 in the front.  Has custom Kennwood sound system installed (does not come with the amp).  Has HID head lights, recent timing belt, water pump and rollers done last summer.  Few minor issues, there are a couple small cracks in the dash and seat, I have not been able to get the rear hatch up, the starter makes a sound when starting (though it always starts), it does sputter when the engine is cold, I usually let it warm up and its not an issue.  the car is garage kept.  has 968 mirrors.  This is a good running car, has lots of power, corners and stops very well.  This Porsche is an old car, not perfect, but a very good driver.  please ask questions before bidding.