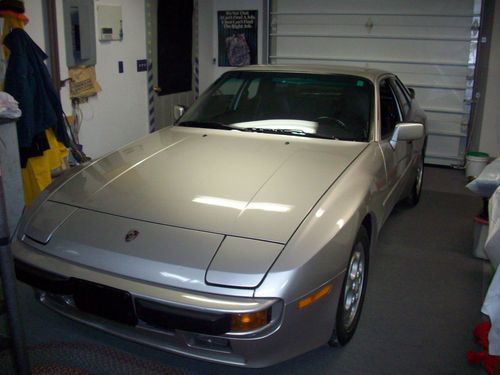 1989 PORSCHE 944 2.7 litre in mint shape. Stored in climate controlled garage and well taken care of. Rare options 220 LSD, rear factory apron, 454 ,533,573,593,650,946. $5,000 worth of service work with documents to back it up: water pump and timing belt at 98,700 miles, new A/C compresser/drier recharge at 78,000, rear end resealed and fluid changed, new alternator at 84,862, fluids flushed, new cap,rotor,plugs,and more. EVERYTHING works in the car, A/C ice cold, heat very hot. Paint and interior are very clean: a few chips and minor scratches that are hard to spot, front pass seat has a  small separation on lower cushion in the front, no dash cracks. The car recently had a windshield replacement with PORSCHE factory glass and seal (had damage from a rock on the highway hitting it). Yes, sunroof works properly. Zermatt silver with black interior. I'm selling because I previously had a 968 convertible and want to go to a 1995 968 coupe. This is a very fun car and my 3.5 year old daughter will miss riding in the back, but she'll love a 968 too!!