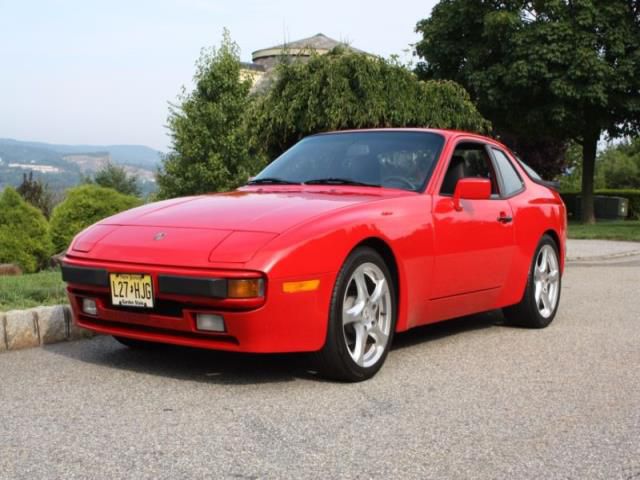 Message me at : cosimosnary878371@yahoo.com 1988 PORSCHE 944, GUARDS RED, BLACK LEATHER INTERIOR. 5SPEED. CAR HAS UNDERGONE A GROUND UP RESTORATION INCLUDING, REBUILT ENGINE,SUSPENSION, NEW CLUTCH, NEW EXHAUST, SEATS, RUGS, SOUND SYSTEM, NEW TIRES ANDWHEELS, PANEL OFF PAINT JOB INCLUDING WINDOWS REMOVED, ALL NEW RUBBER MOLDING.EVERY NOOK AND CRANNY IS DONE TO PERFECTION.A.C. COMPLETELY REBUILT, BLOWS ICYCOLD. NOT A LEAK WILL EVER APPEAR ON YOUR GARAGE FLOOR, ABSOLUTELY NO WINDLEAKS, CAR IS STUNNING. EVERYTHING WORKS. IF YOU LIVE NEARBY AND ARE IN THEMARKET FOR A BEAUTIFUL 944, YOU OWE IT YOURSELF TO COME SEE THIS ONE. RUMOR HASIT, THESE WILL BE COLLECTOR CARS IN THE NEAR FUTURE, THIS ONE FITS THATCATEGORY. ALTHOUGH YOU CAN FIND 944s WITH LESS MILES ON THEM, IT WOULD BE TOUGHTO FIND ONE ANY NICER THAN THIS ONE. IT RUNS AS GOOD, MAYBE BETTER THAN NEW,SMOOTH SHIFTER, HANDLES GREAT.