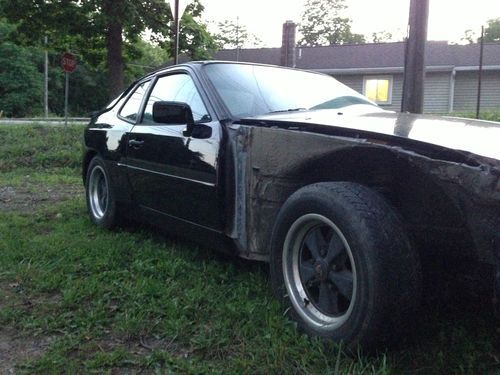 Condition: UsedA vehicle is considered used if it has been registered and issued a title. Used vehicles have had at least one previous owner. The condition of the exterior, interior and engine can vary depending on the vehicle's history. See the seller's listing for full details and description of any imperfections.Seller Notes:"I AM SELLING A 1985 THIS IS NOT A TYPO THE CAR IS FOR SURE AN 85 BUT HAS A COMPLETE MOTOR SWAP OUT OF A NEWER 944 TURBO (UNSURE OF THE YEAR) THE CAR RUNS BUT NEEDS WORK IT WAS PUT INTO A DITCH A FEW YEARS AGO AND HAS BEEN GARAGE KEPT UNTIL RECENTLY IT WILL NEED A PASSENGER SIDE TIE ROD , FENDER , HEADLIGHT AND A HOOD..... THE INTERIOR IS IN VERY GOOD SHAPE FOR AGE AND IS ALL BLACK LEATHER.. THE ENGINE SWAP IS LEGIT NOT COBBED TOGETHER EVERYTHING IS IN PLACE AS IT SHOULD BE ..... I HAVE HAD THIS CAR NEXT TO A TRUE TURBO CAR AND OTHER THAN THE EXTERIOR YOU WOULD NOT KNOW THAT THIS CAR WAS NOT A TURBO ..... WAS TOLD BY PREVIOUS OWNER THAT THE COMPUTERS ARE CHIPPED AND I ALSO HAVE THE STOCK CHIPS ..... I JUST DONT HAVE TIME OR MONEY TO FIX ......"