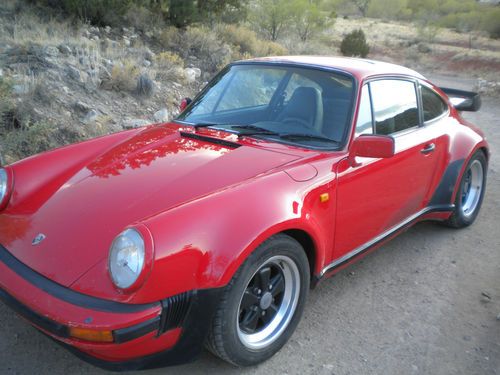 Thank you for your interest in my 930.
The car is a Euro model. Porsche did not import 930 to the U.S. till later. I purchased the vehicle in Florida in 2000.
As you can see from the pictures, the car was a daily driver for a few years. The car was adult driven and the mileage is actual.
The car is mechanically sound and has never been wrecked.
The car is all original as it came from the factory. After receiving the car in 2000, I had the car inspected from bumper to bumper.
Here is what was done to the car by a professional porsche shop.The engine as remove and a complete top end was done.New Dilavar
cylinder head stud were install. New timing chains, hydraulic tensioner s and rails. New clutch and pressure plate. New half shafts,both sides.
Here are the things that need repairing. The sunroof does not work.The rear wiper does not work. The front head light washers don't work.
Needs compressor for air conditioning.There is a little rust starting to form on both sides of the windshield lower left and right.Needs tires.
All else works normally. If you have any question, I will be glad to answer them. Thank you again for looking
and bid with confidence the car is as represented.
PLEASE NOTE: The posting will not accept the vin..
Correct vin is ( wp0zzz93zbs000450).