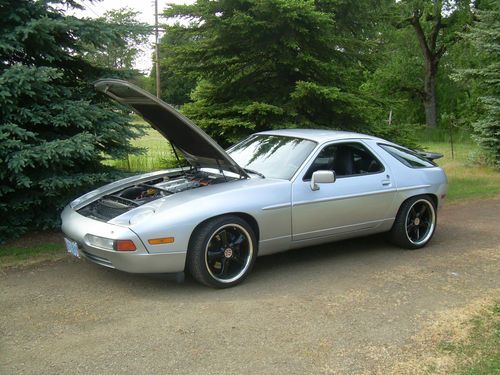 This 928 S4 is a 5 sp, has the 220:1 final drive, with the LSD differential ,  rare and wanted option on these cars . Creates smooth, long pulling shifts. Cruse 70 mph @ 2150 rpms.  All things work as they should. lights,a/c  power controls est. EXCEPT FOR: 1.)Heater temp. control, it gets hot, turns off too. But not tunable, (except by fan speed, there fine and venting changes fine too). 2.) Just this month, the  driver door handle stopped opening  the door gradually? Found on the web where it is an adjustable bar/shaft.  (turnbuckle) with a lock nut that probably unlocked, not typical  for 928's not a big problem.  3.( dash cracks are typical and this one is showing cracks.  We all know that the 150.00 dash caps (not the carpet covers) look good and go on easy, Did a 280 Z  yrs ago and I was thrilled.  The interior  over all in good condtion no rubbed raw spots or tears. The exterior has miner chips, front and front of the mirrors.  One weird spot on  the roof, car has older  second  paint job, its smooth tho? and all paint is shiny.  And last thing , the left rear corner looks a little bumped , never saw it till the first wash. The free vehicle  history may expose  something for us all.  I don't drive the car hard, but I do enjoy  wide mountain freeway driving with this car. AFTER MARKET : steering wheel is Porsche, but not 928. I remember the price(630.00) but think its  from the 911 line . The rims are nice, left rear very lite rash spot. fronts: 18x9 ,rear are 18x10 inch. tire size 11''wide rears 295/30 zr 18's. front 9.'' wide , 225/40zr 18's . Exhaust,  stock except for the new X pipe( 30 hp) and pair of  s.s. cats, making a low V8 rumble. good alpine single cd player.  calls, ok , any time , Im hard to reach but  will surely call you back, I work 12 hr  shifts and turn the ringer off till I get up. thank you ,  bill / 541-680-0053