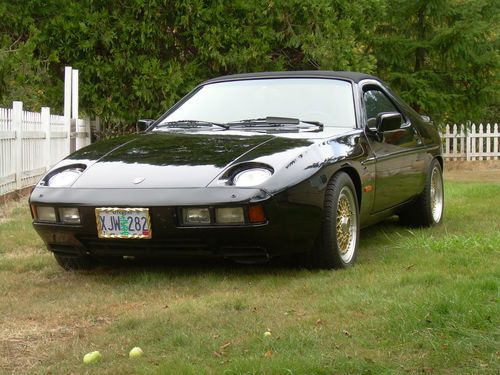 Condition: Used: A vehicle is considered used if it has been registered and issued a title. Used vehicles have had at least one previous owner. The condition of the exterior, interior and engine can vary depending on the vehicle's history. See the seller's listing for full details and description of any imperfections. ...
1984 928 S Porsche at 77,xxx actual miles.) (u. s. legal euro spec car) engine code m28/21,
310 hp. quality headers gains are up to 20% =372 hp. ( the us models are 234 hp ). shiny black ext. wit blk canvas top and pwr glass moon roof. both are rare, some Porsche people say factoy installed,some say euro after market, I don't know , but the headliner is molded to /for the larger meshed glass,sun roof. ( maybe it was a euro trend back in the day) . all seating is new med. dark blue soft leather, as the interior is blue . good carpet, porsche matts , cargo carpet lesser cond. 5 speed with rear final @ 2.73 Porsche says this combo is a 143.6 mile per hour car. has air/ working a/c but mount is broken so belt is not able tighten enough. has the period correct blk/ gold to include gold center BBS rims. runs good stops good all lighting works, heater too but temp. control stays on high or off. fan speeds are ok. has spare and factory tool kit. note the red rear euro fog light and no big  rubber bumpers at the license plate sides, does show mph/klm ,some German words and it is left hand drive. I haven't found/figured out what country this car originally sold in.   (  The Oregon title says reconstructed, haven't learned what this represents), however  my 98 S 10 was deemed totaled after  a30 mph deer strike, yep,$113.00 of E bay aftermarket parts," head light, grill and blinker light. and its my to work and back ride again". not to say the DMV is wrong, just that Porsche  drives like / feels like a 70,000 mile car and the pics show  that a body shop did  a great job  .It seems that if you ship a car to your home from abroad , it was well cared for at its new home, Im guessing Im owner #3.    ( yes the front spoiler/bib) is missing do to the retired gent I got it  from. He broke it on a parking stop and took it off.   thanks for looking. I will return calls that I miss, I sleep days and work long nights ///541/680/0053,    PS: the vin in the official box is a 914 I have, EBAY is not able to process the  ZZZ code because its a European code
On May-12-13 at 16:02:25 PDT, seller added the following information:

I have added 15 more photo's of this car taking today. all pic's are not older than last fall 20012,