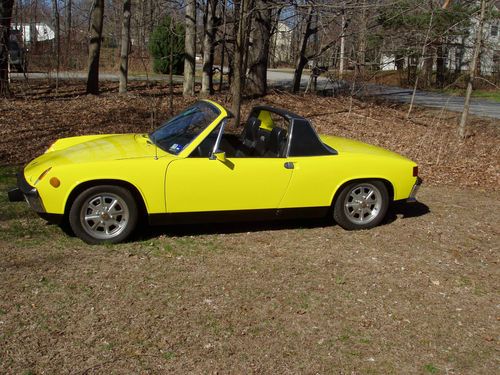 This is a used 1973 Porsche 914 2.0 liter.  It is great fun to drive with it's powerful 2 liter engine and it's 5 speed transmission.  It has a two barrel Weber carburetor and it runs great.  It is equipped with the following: Kenwood AM/FM/CD sound system, factory fog lamps, center console, wood shift knob, and correct Fuchs alloy wheels.  In the last 90 days it has had new front strut inserts, a new Bosch rebuilt starter, a new Bosch rebuilt alternator, new voltage regulator, and a new fan belt.  I also have receipts from the last owner totaling $10,927.54 for restoration and repair work. This car is ready for some serious summer fun.  Runs great.  The odometer reads 28,163 miles so I am assuming that it has been around once and is actually 128,163 miles but I cannot make any such guarantee.  The buyer is responsible for pick up and or delivery.  A $500.00 non-refundable deposit via PayPal is due within 48 hours of the close of the auction.  The balance is due within 7 days of the close of the auction.  Sorry, but due to the proliferation of forged bank checks, I will only accept the balance in either cash upon pickup or a bank transfer.  I will not accept the balance via PayPal. I can store the car inside for up to two weeks after the close of the auction as long as all payment are made as outlined above.  This car is being sold as is where is with no guaranty or warranty of any kind.  I am located in Berwick, Maine, 70 miles north of Boston, 50 miles south of Portland, Maine, and 35 miles east of Manchester, NH.  You are encouraged to come and inspect and drive the car before the end of the auction.  Please note that I prefer not to discuss my reserve until after the close of the auction.  Please do not email asking what the reserve is.  Thank you.