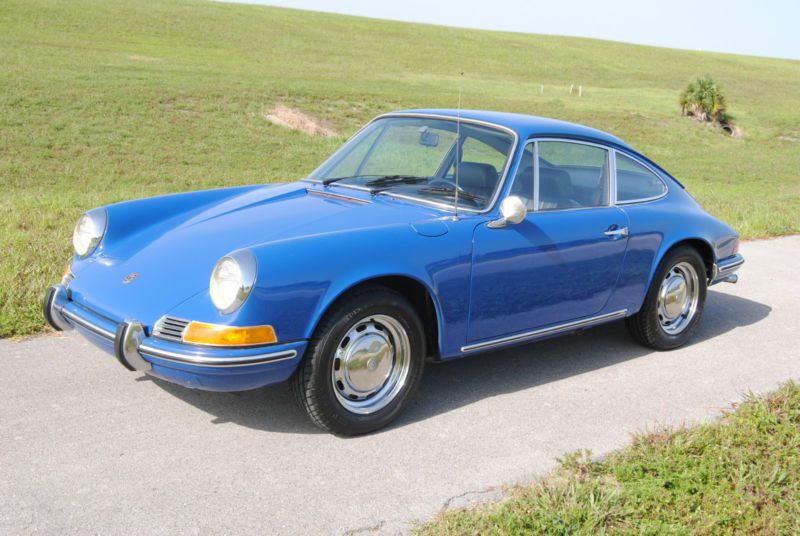 Send me an email at: natalianzzeches@lifefriend.com .

1969 Porsche 912
VIN 129021752
Engine # 4094766 (Original Engine)
Tranmission- Four Speed Gearbox
Odometer: 27,518
Actual mileage is 127,518. This mileage is supported from mechanical receipts dating back to 1969.
Original window sticker included. Purchased from Four J Motors, 6000 Pacific Blvd, Huntington Park, Calif.
Delivered on 3/29/69.
Many records for the car dating all the way back to 1969. Including the original red plastic Maintenance Record
book from Porsche.
Paint Code: 63-6803-H Ossi Blue
Original paint in the door jambs, car has been repainted Blue many years ago. Paint is driver quality and looks
very good five feet away but close examination shows scratches, checking, and some chips in the front.
This car is a time warp. Original carpets and original headliner. Even the interior smell of the car takes you
back to 1969. This is not a showcar, this is a car that has been driven and enjoyed. Hopefully this car will find
a home with somebody who will continue to drive it, just like it was designed to do.
CHASSIS- How much RUST???
We all know that every old 911/912 has rust. One of the worst places to find rust is around the rear torsion bar
tube area. This car shows NO rust around the rear torsion bar tubes. Quite often rust is found in the rocker
panel area and the bottom of the front fenders – this car is solid in both areas. I am not going to say there is
no rust but I can assure you that there is not the type of rust that is typically found in many of these cars. The
car was repainted many years ago, if they would have painted over rust there would be signs of the rust coming thru
the paint, no signs of rust are visible in the paint.
RECENT MECHANICAL WORK- Performed at 27,300 miles ( 200 miles ago)
Major Engine Service
*Remove and Replace Engine
*Replace Spark Plugs and Spark Plug Wires
*New Engine oil and filter
*New Generator and Generator Belt
*Rebuild Carburetors
*New Distributor
*New Clutch Assembly
*Replace Shifter bushing
*Replace fuel lines
MAJOR BRAKE SERVICE
*Rebuild all brake calipers
*Replace all brake pads
*New brake master cylinder
*New Flexible brake lines
*New Front Rotors
*Surface Rear Rotors
SUMMARY:
This 1969 Porsche 912 is special because it is a very original, unmolested long wheel base 912. The car is a
pleasure to drive and really takes you back in time. While there are plenty of cosmetic flaws through-out the car
they are the type of flaws that happen when you use a car. The general condition of the car represents a car that
has been taken care of it whole life, as all the mechanical receipts give evidence. Runs and drives very well.